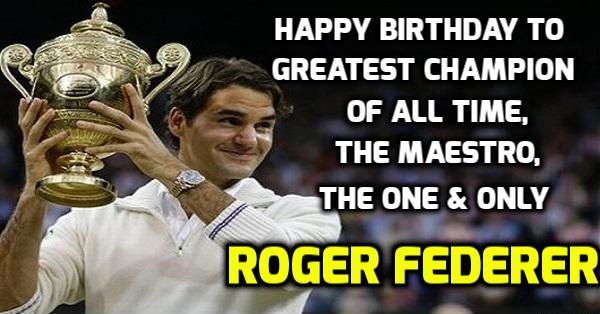 Roger Federer is widely considered as the Greatest Tennis Player of All Time. With 17 Grand slam titles , 80+ Titles at the ATP level, He is one of the Best Tennis Player to play this form of game. To be frank the Present Generation is blessed to witness the players like Roger Federer, Rafeal Nadal, Novak Djokovic etc. Roger Federer is a master of Playing all kinds of Tennis Shots. His Tweener and One Handed Backhand is a Delight to watch.

1. Roger Federer Holds Citizenship of both Swiss and South Africa Roger Federer was Born in Basel , Switzerland. His Father father Robert Federer is from Swiss and Mother Lynette Federer is a South African.

2. Federer Started watching Tennis when he was 4 and Enrolled in the School at the Age of 6 Watching his Childhood Idol Boris Becker winning his First Wimbledon title in 1985 he started Watching Tennis matches for Hours on Tv and thereby enrolled himself in the School Training.

3. Federer was Ranked World No.1 in Juniors level before Turning Pro Roger Federer has played 6 ITF Junior Circuit Finals where he won 5 of them and 1 being Runner Up. In 1998 in his last year as a Junior Player he won Wimbledon Juniors Title and the Prestigious Orange Bowl. He was Recognised as the ITF World Junior Tennis Player of the Year in 1998. Yes you Heard it Right Federer and Mirka are the Parents of 2 set of Twins Leo & Lenny, Myla Rose & Chaelene Riva. He is also the Uncle of another Set of Twins i.e. his Sister Diana also gave birth to Twins.

5. Defeating the King of Wimbledon and Occupying the Wimbledon Throne In 2001 Roger Federer Defeated 7-time Wimbledon Champion Pete Sampras to reach the Semifinal of the Tournament and there by Landing his Footprint on the Center Court Arena. Roger Federer holds a Record for being the World No.1 for 302 Weeks including 237 Consecutive Weeks.

7. He is the First Swiss Man to win a Grand Slam Title Yes Roger Federer holds a Recod for Most and Consecutive Grand Slam Apperances i.e 63 Apperances. i.e since 1999. ( Excluding the 2 times in 1999 where he didn’t qualify)

9. Roger Federer has Never Retired in the Mid way of a Match in his Entire Career Spanning more than 1000 Matches. 10. This is Just an Insane Record Roger Federer has a Unique Record of 105 Consecutive Points without a Single Unforced Error. This is why we call him Maestro. The above Pic was during the US Open match against John Isner. Roger Federer holds a Record for winning atleast 1 Singles Titles for 15 Straight Years. He is Tied up with Ivan Lendi.

12. Federer has a Record of Winning 24 Straight Finals 13. Federer has won 3 Grand Slam Titles in a Single Year 3 Times, The Rest of the ATP has done it only Three times so far 14. Roger Federer has won Everything in the World of Tennis 15. Roger Federer was Ranked 2nd for Most Admired & Respected People in World along with Nelson Mandela who was Ranked 1st Roger Federer was Polled 2nd most Admired and Respected person around the world ahead of people like Bill Gates and Oprah Winfrey. In 2007 Roger Federer Became the First Living Switzerland Person to be Featured on a Swiss Stamp. Federer Established Roger Federer Foundation in 2003 to help and promote access the Children for Education and Sports. He also arranged and played many exhibition matches and Donated to the Good Cause. He Auctioned his US Open Racquet to aid the Victims of Hurricane.

Roger Federer is not only a Great Tennis Player but also a Great Human Being.

From the whole Team of Rajnikanth vs CID Jokes we Wish Roger Federer Happy Birthday, may he Entertain us for many more Years.

These 17 Tweets Under #LikeSRKSays Will Make You Fall In Love With SRK Again & Again
KRK Banged “Bangistan” On Twitter! You Can’t Miss To Check Out These 11 Tweets