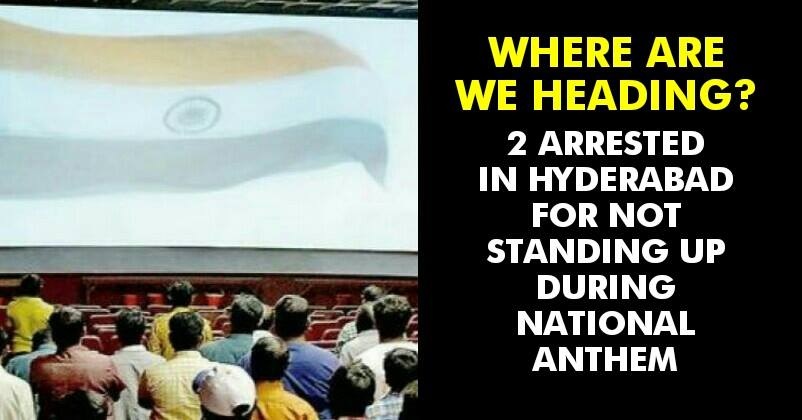 There was a time when we used to go to theaters just for the sake of some entertainment, but now, it’s a way of showcasing our patriotic side whenever national anthem gets played before the start of the movie. Have we, as a collective society stooped so low that we really need National Anthem to be played in movie halls in order to prove and justify our patriotism?

We have read a lot of articles where people were beaten up for not standing up for the national anthem. Some of them couldn’t do that because of their disability while some of them chose not to stand up because national anthem is not the only criteria to prove our patriotism. And the most important question that we need to address is that why do we need to prove or justify our love for our country.

Recently 2 people in Hyderabad were arrested by the police for not standing up for the national anthem in the INOX theater. The incident that took place on Saturday in Kachiguda area was reported to the police by a journalist who was also inside the same theater for the movie. According to the journalist, these two people refused to stand up even when people asked them to do so. According to the journalist, he filed the complaint out of his ‘personal interest’ and him being ‘a citizen’ of our country.

According to these two people who were arrested, the police didn’t show them under which section they had been booked in the FIR. Also, they weren’t allowed to contact their family members and were instructed to switch off their mobile phones. However, after they were released, it came to notice that they were booked under Section 3 of Prevention of Insult to National Honours Act, 1971, which deals with intentionally preventing the singing of the national anthem or disrupting someone engaged in singing it. It carries a sentence of up to 3 years in jail and/or fine. I wonder when did they choose to disrupt someone’s engagement while singing the national anthem or how did they intentionally prevented someone from showcasing their patriotism for their country. How did a simple and harmless decision of not standing up for the national anthem in a movie hall become an act of insult to national honor?

Both of them are Indian citizens. One of them (30 years old) just recently came to India from Australia who had been working there for several years. He came here for his marriage and now will be returning back to his work. According to his claim reported in Scroll website, he said, “I had sprained my leg climbing the stairs. Though I was about to stand during the national anthem, I heard someone behind me shouting, ‘arrey… arrey’. When I heard him shout, I was really annoyed and didn’t stand.” After arresting him, the police called his brother who was a professional lawyer and threatened him by saying that his brother had committed a very big crime. They were later released on bail after being detained for 4 hours. At this point of time, his family is worried because of this police case that can now hamper his return to Australia. In an interview given to Scroll website, he said, “I just want to know this – if it is punishable to not stand up during the national anthem, then shouting during the national anthem should also be a crime, right? I too can file a case against him” When the journalist who had reported this incident was contacted and asked about the reason for his complaint, it came out that his recent past bitter experience tempted him to file a police complaint against the two people. This is what he said to the Scroll website in his interview, “Earlier, I was watching another movie, Dwaraka, when I saw a couple, one of whom did not stand for the national anthem. I felt bad then. And when I came for this movie and I saw the same situation being repeated, I felt really annoyed … One person stood on my insistence but the other person forced him to sit down and was chatting on his mobile.” According to him, the law against not standing up for national anthem need to be stricter.

Personally speaking, I love to stand up during the national anthem whenever it is played. I don’t do it for showcasing my patriotism, but because I don’t mind doing it. The reason is just simple. It’s my personal choice. And forcing my personal thoughts on someone else is just way too bizarre. You don’t like watching people not standing up for the national anthem? Fine, then don’t watch them. It is always necessary to keep your thoughts in your sleeve and not to throw them around on every damn person you meet in a movie hall. National Anthem is our pride. It’s our recognition and it’s certainly not that weak that it will lose its importance in our eyes if a random person chooses not to stand up for it, especially in a movie hall.

Continue Reading
You may also like...
Related Topics:arrested, National anthem

Indian Railway Failed To Give A Compensation To This Farmer, In Return Court Gave Him A Train!
WTF! BSNL Male Staff Landed In Trouble For Sending ‘Smiley’ To A Female Colleague On WhatsApp