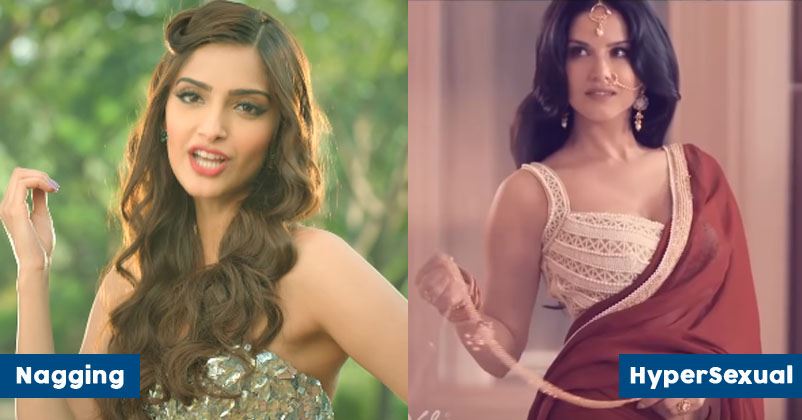 Women have always been stereotyped into a specific image. They have often been showcased as weak and unable to stand for themselves. Not only this, but women are also portrayed as over-demanding, and have to look just perfect to achieve anything in their lives.

Here are some of the stereotypes that Indian advertisements can’t let go off.

This advertisement by snickers shows that women are continually nagging about everything. Their tagline, “Bhukh lagi to tu ladki ban jata hai,” is wrong on so many levels.

This advertisement by Airtel that shows the woman is the boss of her husband asks him to work late. She later goes home and prepares a meal to ‘make him happy’ after a ‘long day’ at work. Hold on now, women might be the boss at the office, but their prime duty is to cook, is it?

Yeah, right because women only want diamonds in their life. Leave aside great career, good pay, respect. Women are demanding even when the man can’t afford it. This advertisement by Tanishq shows that women are not self-reliable and have to give hints to get something from their husbands even if they can’t afford it.

4. You need to be fair to get anything in life!

This advertisement by Fair and lovely shows that to achieve something in life, a woman needs to be fair first of all. The ad shows that a woman inspiring to become an IAS officer has to concentrate more on her skin tone than her studies and bam she will achieve anything!

Wild stone ads perceive a woman as if their uterus will jump out if a man smells good. Honestly which woman gets attracted to a man by sniffing him? Forget intelligence, compatibility understanding; if a man smells good, it is more likely than a woman will have coitus with the man.