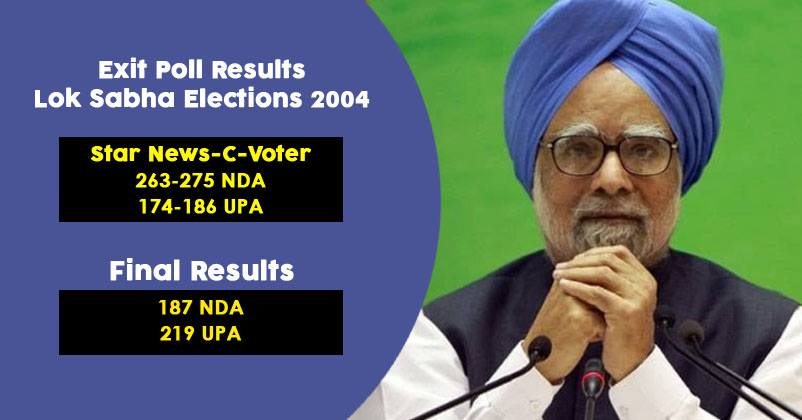 As the final round of polling have ended all eyes are on the exit polls and the nation is glues to the television to see the predictions made by different news channels. While these predictions are almost always true but there have been times when the actual results proved exit polls wrong and shocked the country.

These are the five instances when actual results did not live up to the expectations of exit polls:

After winning three consecutive state elections in Madhya Pradesh, Chhattisgarh and Rajasthan, Atal Bihari Vajpayee government dissolved the parliament early. The ruling party BJP hoped to win the re-election and started campaigning with a slogan of ‘India Shining’. Exit polls of that year predicted that NDA could secure over 240 to 250 seats, winning with majority. But the actual result was just opposite as BJP just managed to get 187 seats.
Here are the projections and actual result of that year.

Though most of the exit polls predicted that BJP will win 2014 Lok Sabha elections by large margin but none of them predicted majority. The actual result were shocking for the whole nation and specially for Congress which conceded at only 44.

UP assembly elections happened after a big decision of demonetization by Modi Government. The ruling Samajwadi Party made alliance with Congress to defeat BJP and the exit polls predicted that demonetization will definitely result in loss of votes for BJP. But the actual results were surprising and BJP won more than 300 seats and formed government with majority.

Bihar assembly elections of 2015 were re-election and exit polls could not predict a clear picture. The predictions showed that there will be mixed government in Bihar but the result was a big win for RJD-JDU-Congress team and RJD emerged as the largest party.

None of the exit poll agency predicted victory of AAP with such huge margin that Congress lost all its votes to the new party. Arvind Kejriwal had already resigned from his seat after winning the first time and being the CM of Delhi for 49 days. When the final results arrived it not only shocked the nation but also the two largest national parties BJP and Congress.

2019 General Elections Exit Polls Are Out. Check Who Will Be Next PM As Per Exit Polls
These Memes On BJP Are On Point, As Exit Polls Tips In Their Favor