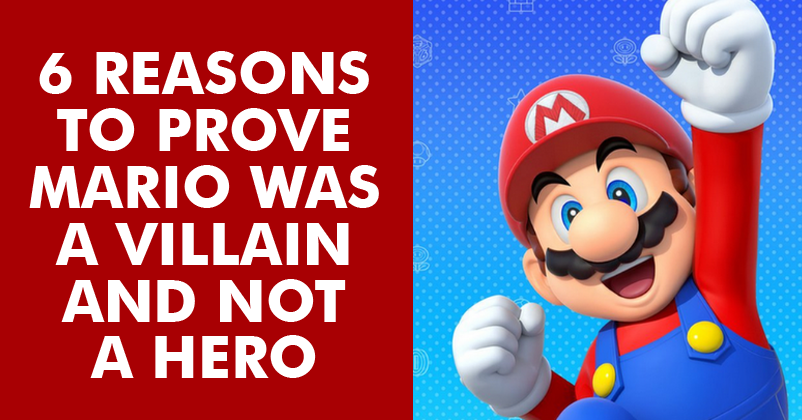 Video games, they made our childhood awesome, they took us to the fantasy lands and onto many wonderful adventures. We have played countless games on many different consoles, but our first game will always remain special. Remember your very first video game console of Nintendo, pushing down and popping out the cartridges, remember the delightful joy of playing ‘Mario’?

We have all played ‘Mario’, arguably one of the best games ever made. We played as him, we went on many adventures to save the princess, as a kid he was our hero. But what if I told you he wasn’t a hero, but a villain. Before saying anything, try to think for a minute. Can you identify yourself with Mario? I highly doubt it. He is an evil, he is dangerous, he is a big bad bully and a villain. And the funny thing is we just don’t realize it and love him as a hero.

So here are 6 Reasons Why Mario Is Not a Hero, But A Villain! The purpose of this list is to call Mario on all his wrongdoings.

The most glaring reasons why he’s an egotistical, self-absorbed, inconsiderate as#hole in the history of video games.

1. Mario tries to kill a baby gorilla who tries to save his father. PETA should file a case against Mario. Mario is evil, his animal cruelty can be easily seen in the Donkey Kong game. This sinister plumber tries to Kill a baby gorilla who comes to the rescue of his father. In the original first Donkey Kong arcade game, Donkey Kong Sr. gets captured by the bad Mario.

Just look at this commercial and tell me he’s not evil. When you watch Donkey Kong Junior game carefully, you’ll see that Mario is actually whipping poor animals to go after the baby Gorilla who is just trying to save his father. That is why Donkey Kong kidnapped Pauline, Mario’s first girlfriend, in the original Donkey Kong arcade game. It all seems fair now. He slaves poor animals, from birds to alligators, he whips them. He tortures them, he even puts the fruit out of their reach.

2. He is always there to save the Princess but why didn’t he protect her in the first place? The Princess gets captured again and again…and again. Why is Mario not around her to guard her, Mario is a complete negligent jackass. The Mushroom Kingdom isn’t a perfect place to live, with Bowser around, the flying bombs, explosions, genetically modified turtles and ducks, why doesn’t Mario just move out with the Princess to a new place? But that’s not all, you have seen how Mario has encountered invincibility stars, the ability to throw fire, the ability to jump high, the ability to move quickly in water, and most importantly mushrooms that enlarges his size, then why the hell he doesn’t any of this with the princess? What’s the purpose of a hero? To protect innocent lives, to save the day, to avoid collateral damage. Mario also manages to save the day, rescue the Princess, but at a very expensive cost. Mario destroys the very kingdom that he was supposed to protect. Not only that, Other than destroying the Kingdom that he’s supposed to be saving, he also robs every major government building he encounters on his way.

He demolishes buildings, castles after he has defeated Bowser or his decoys. That’s why the Goomba, the Koopa Troopa, and many people just keep wandering around in the open. Citizens of the mushroom kingdom have become homeless because of Mario. These people could find a shelter in the castles, but Mario doesn’t like that.

Mario also feels that he’s entitled to all the currency of the Mushroom Kingdom. He steals the Kingdom coins, he also increases his points and coins by killing poor creatures on his way, he uses them for his own benefit. This dick also consumes their valuable natural resources like mushrooms, stars, suits for his personal gain. He doesn’t pay for it and uses them up to their fullest extent and then throws it away. He is a fraud. This idiot PLUMBER never went to any MEDICAL SCHOOL. And without any medical training, how are you supposed to help people? Just think how many people Mario has killed with his bogus pills and fake medical opinion? Mario was practicing medicine unlicensed.

5. Mario is a self-absorbed douche. He doesn’t care about his friends.

If it weren’t for Yoshi, Mario would have never succeeded in his mission. Yoshi is easily one of the most loyal, selfless and heroic characters in the history of video games. Right from the birth, when they hatch out, they dedicate their lives decide to help out a plumber in his mission. Yoshi has amazing powers and abilities like flying, spitting fire, eating certain enemies. Such a unique animal should be cared, kept safe and must be rewarded for his contribution.

And see how Mario treats him! Can’t he simply make the jump all by himself? Eat some funny mushrooms to gain power, but he has to sacrifice the poor animal. Toad, a citizen of Mushroom Kingdom and Princess Peach’s one of the most loyal attendants, always trying to protect the princess is way better than Mario. Toad always beats him to the castle in the quest of saving the princess. And this is what he feels about Mario. Remember when Mario meets Yoshi in Super Mario World. Yoshi is pleased to see him. He greets by saying,

“Thank you for rescuing me. I was on my way to rescue my friends, Bowser trapped me in this egg…”

And what’s the next thing Mario does? He jumps on Yoshi’s back, he punches the poor dinosaur in the back of the skull, he travels long distances on his back, and he ditches him whenever a hurdle comes.

Continue Reading
You may also like...
Related Topics:10 Animals That You Can Find In US And No Where Else, Mario bad guy, Mario Bowser, Mario hero villain, Mario Life lessons, Mario NES SNES, Mario Princess, Mario princess another castle, Super Mario Bros

You Won’t Believe What Are New Year Resolutions Of SRK, PM Modi & RaGa! #CelebResolutions2017
10 ‘The Kapil Sharma Show’ Jokes That Will Make You Burst You Into Laughter!