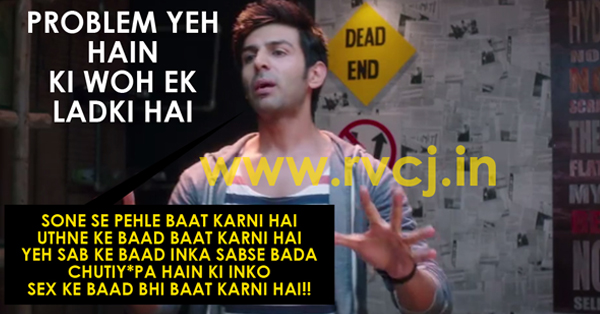 Finally the wait for one of the awaited movie trailers on 2015 is over. Pyaar Ka Punchnama was a super hit comedy movie which made its place in many hearts. Especially the acting of the stars acted in the movie was liked by all. The movie was all about Bromance between three friends who were also supposed to be room mates. The movie had the guts to show what a real life Relationship is all about. It had put some light on what a guy has to go through for his relationship, to grow it and to protect it.

Yet again the sequel of the movie is here. The trailer has been released today and already is a hit. People are liking it, sharing it & loving it. The movie again focuses on the same issue of what a man has to go through in a Relationship. And how the care turns into frustration on one particular day. The movie is all set to release on October 16th. If you haven’t watched the trailer yet, then CLICK HERE.

1. The Epic Truth Has been Spoken 3. Difference Between Us & Them 7. And The Epic Dialogue At The End!! Comment on what you feel about the movie and the trailer in the comments below.