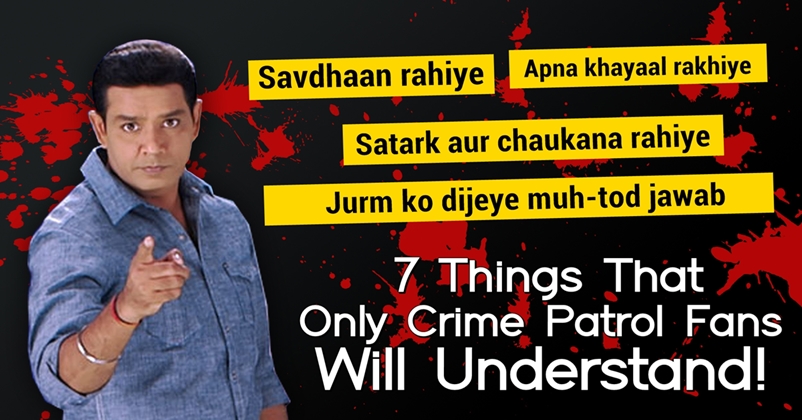 It has been 13 years and still Crime Patrol continues to stay popular and relevant as always. The show started with the purpose of making the citizens aware about the crimes happening in the society, provides useful measures to fight these crimes. As a matter of fact Crime Patrol is doing a great service to the nation by encouraging them to not tolerate the crimes at any cost, restoring the faith of the people in the legal system. Their motto is “Crime never pays” which is an undisputed truth, this helps in educating the people who have lost their path and thinking to resort to crimes as the ultimate solution to their problems. This reality crime television series covers the crime cases that occurred in India. Not only it covers crime stories, but also presents them in a dramatized version, it puts you in the shoes of the victim, it is a true depiction of real life incidents.

Crime Patrol shows you the harsh reality of the world. Anyone who thinks that they are safe and nothing bad will ever happen to them are living in an illusion. This show makes you aware of your surroundings, shows you that bad things can happen to anyone at anytime. So one must always be alert and careful because crime can knock anytime.

So let’s take a look at 7 Things That Only Crime Patrol Fans Will Understand!

1. Anup Soni is a man of experience, he can become a great counsellor when it comes to guiding the troubled youth or saving a marriage. He knows what’s right for you. So if you’re confused and getting some funny ideas in your head, then it’s time you hear a few Anup Soni’s words of wisdom. 2. No offense, I respect our police and it’s all because of them that we are safe and sound. But Crime Patrol exaggerates a lot of stuff. There’s a lot of room for improvement in the Indian Police. Crime Patrol projects the police as very efficient and honest which mostly they are, but if you ever had dealt with the police, then you’ll know they are a lot different from what you see on the screen. 3. Crime Patrol is an educational program. It makes the normal citizens aware of the crimes. But it can also educate the aspiring criminals, why not to commit crimes, however some people can take it in a wrong way. Some aspiring criminals can learn a few tricks from the show, how to commit crimes intelligently and how to not repeat the mistakes which led to the arrest of many criminals.

A must watch TV show for each and every aspiring criminal out there. 4. After all Crime Patrol is also a television show, which means ratings are important to it just like every other TV show. No wonder why it covers sexual crimes like rape, sexual affairs and certain adulthood in a very dramatized version. They have to make a crime story look sensational and entertaining.

5. You know you have seen excess of Crime Patrol when 7. All jokes aside, Crime Patrol is a must watch program. A show that makes you aware about different crimes happening around you, a show that can teach you some great moral values, a show that will teach you why crime never pays. So be a responsible and alert citizen, keep your surroundings safe. Make this country a safe country. Arnab Goswami Asked Virender Sehwag To Appear On His Show, But He Denied Because…
Finally Karan Johar Speaks Up On The KRK Controversy! You Won’t Believe What He Said !