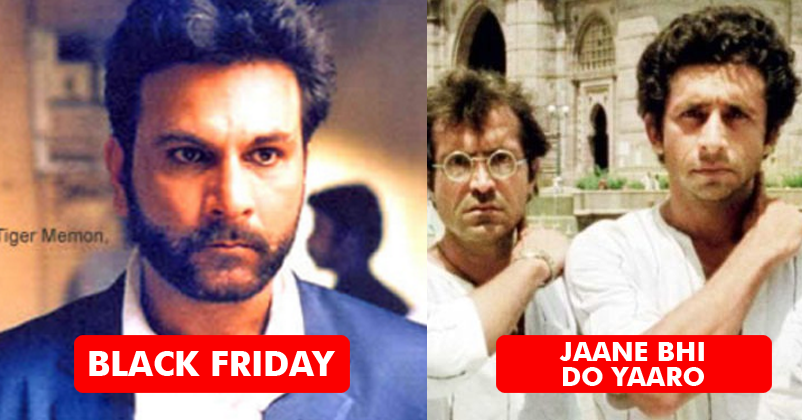 Every year we have movies which break old records, create new ones, and leave us wondering what’s so special about it. People rush to multiplexes to catch their favorite Bollywood stars doing the same stuff over and over again, same old clichés, an unneeded item song, a remix of a classic, and BANG the movie joins the crore-club. Of course the movies aren’t disappointing because they deliver what they promised and what we expected – Indian masala!

However, sometimes there comes a film which restores our faith in Bollywood.There are films that touch our livesand make sense. And let me remind you, there is no scarcity of such quality movies in Bollywood. We just don’t hear much about them because these movies are not being promoted on some TV shows, they don’t put up huge billboards, or use any of the marketing gimmicks that commercial movies use. As a result these movies don’t earn big bucks at the box-office, but they win the hearts of the fans and the critics. So let’s take a look at 8 Brilliant Bollywood Movies That Didn’t Get The Recognition They Deserved! Released in 1983, the film is a dark satire on the widespread corruption in Indian politics and new media, bureaucracy, business. The film stars talented actors like Naseeruddin Shah, Ravi Baswani, Om Puri, Pankaj Kapur, Satish Shah. For this movie, director Kundan Shah won the national prize. The movie was a box-office failure when it was released, but its satirical depiction of the corruption, selfishness in human behavior is still relevant today. Directed by Anurag Kashyap, this crime film is based on a book of the same name by Hussain Zaidi about the 1993 Bombay bombings. Black Friday was so controversial that the Indian Censor Board banned it, it wasn’t allowed to be released in India for three years. Supreme Court allowed the film release only after the TADA court finalised its judgement in the 1993 Bombay bombings case. The film follows the story of the Bombay Bomb Blasts and the aftermath. Haasil is one of the best movies of Tigmanshu Dhulia, the background of the film is student politics which takes a dangerous turn. The film has gained a cult status over the years. You must definitely watch this film for Irrfan Khan’s outstanding performance as a villain. Gulaal is a political drama directed by Anurag Kashyap, starring talented actors like Kay Kay Menon, Piyush Mishra, Abhimanyu Singh, and Aditya Srivastava. The film’s release was stalled due to financial reasons, it had to wait for years to finally be released with the support of Zee Limelight. Gulaal explores themes such as seeking power, perceived injustices and hypocrisy of the men in power. It is one of the best political films of all time. This comedy drama is the directorial debut of Dibakar Banerjee and it stars Anupam Kher, Vinay Pathak and Boman Irani. The film was made on a small budget, but it managed to perform well at the box office, the film also won the National Film Award for Best Feature Film. The film is about a retired middle class man who tries to get his land back from a deceptive property dealer. Directed by Manish Tiwary, this film is something that every college student could easily relate to. The film explores the ambiguities of the youth years. When you’re young, the possibilities are just endless, that’s why every youngster should watch this film. A mother leaves her son to work at his uncle’s Dhaba in a Rajasthan village. The young boy chhotu becomes so inspired from late former President of India, A. P. J. Abdul Kalam that he changes his name to Kalam. Kalam befriends a boy of his age, who turns out to be a prince. For this film, the child artist who played Kalam was awarded the National Film Award for Best Child Artist. This historical war drama stars Manoj Bajpayee in the lead role and it is based upon events of British India’s Chittagong Uprising. Critics gave rave reviews to the film, Manoj Bajpayee gave a stellar performance in the film. The director of the film won the National Film Award for the Best Debut Film.

So did we miss out on any film you wish to add? Please let us know by commenting below, feel free to share your views and opinions, and we’ll come back with another list.