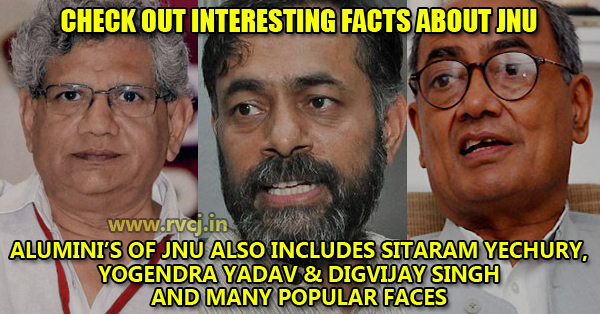 Here presenting you 9 unknown facts you should know about JNU.

1. JNU was established by an act of Parliament in 1969 during Indira Gandhi’s Period. 2. The National assessment and Accreditation Council (NAAC) gave a grade of 3.91 out of 4 to JNU. This is the highest grade attained by any University in the Country. 3. With the help of Wipro, JNU has been moving towards paperless institute and the library is connected to students and faculty by a wireless network. 4. List of Notable Alumni of JNU is way too long.

Some of them are as follows: 5. In 2010, JNU was ranked as the 2nd Best Educational Institute by the INDIA TODAY–Nielsen Survey 7. Violence in JNU during a cultural program held in 2000

In April of 2000, JNU invited two Pakistani poets Fahmida Riaz & Ahmed Faraz for a cultural event. Two army officers present in that event protested against it and they were assaulted for doing the same. To escape from the assault, one of them fired in the air. (Pic was from recent sedition controversy)

8. Protests over a meeting held by All India Students Association soon after the 2010 Maoists Attack in April 2010.

The meeting by AISA-led to the protests from rival unions of ABVP and NSUI. A cultural event against the execution of Afzal Guru led to the anti-India slogans and protests from the ABVP. JNUSU president Kanhaiya Kumar has been arrested in this issue. 10 Facts About Japan Which Will Make You Visit Their Amazing Country!
15 Interesting Facts You Didn’t Know About Shahid Kapoor!!