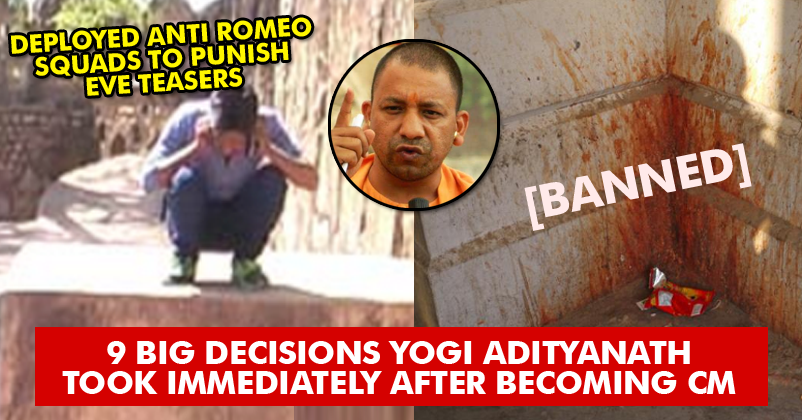 The moment when we heard the news of Yogi Adityanath’s name being actually considered for the Chief Minister post of Uttar Pradesh, a lot of thoughts popped up in our minds. His aggressive approach and controversial statements on various issues were quite famous for all wrong reasons. There were doubts in our minds. However, within 3 days of his tenure as a Chief Minister, he has done a lot more than what we thought, thus surprising every single one of us. So here are 9 things that he did right after becoming the Chief Minister of Uttar Pradesh.

It was perhaps on their top priority list and they dealt with it like a boss. They cracked down on 2 illegal slaughterhouses in Allahabad i.e Rambagh and Atala slaughterhouses. Even in Lucknow and Varanasi, several meat shops and slaughterhouses were sealed that were illegally doing their business.

2. A tight slap on VIP culture. As soon as he became the Chief Minister, he gave an order to all his ministers where he made it clear that no one will use any red beacon on top of their vehicles.

He has asked his fellow police officers and senior administrative to keep their eyes on every social media post that poses a threat to communal harmony and peace.

4. Asking Police Officers to change their opinions on women safety.

He has appealed to all the police officers to change their mentality and outlook towards treating women and has asked them to take strict actions against the defaulters caught in any activities of eve teasing or women harrasment.

5. Issued an order to make a strategy for the end to all the crimes in the next 15 days. In reference to the murder of BSP leader in Allahabad, he has asked DGP Javeed Ahmed to arrest the culprit and drag him down to the court. He has issued an order of preparing a blueprint for restoring law and order in the state within 15 days.

6. He has asked all the ministers to disclose their overall net worth.

On the very first day of his work, he asked all the minister to disclose their incomes and submit their net worth to the CM secretariat and the BJP office well within next 15 days.

7. He has ordered his ministers to keep their mouth under control. Well, you can call it a perfect example of irony. He has asked his ministers to be cautious while making any statements that can hurt people’s sentiments.

As BJP had promised in their manifesto, the formation of ‘Anti Romeo Squad’ is finally done where they will keep a check on eve teasing cases with quick justice. In the first day itself, over 900 people have been questioned by these squads who are now deployed near malls and university campuses.

9. No Tobacco and Pan Masala in Government office premises. The order was confirmed by the deputy Chief Minister Keshav Prasad Maurya, who said that no official in the government office premises will be allowed to chew tobacco and pan masala in order to keep the surrounding neat and clean.

So these were some of the decisions that Yogi Adityanath took soon after becoming the Chief Minister of Uttar Pradesh. What are your opinions about it? Please share your views in the comment section below.

You Won’t Believe On Which Rank India Stands In The List Of World’s Happiest Countries
No Need To Carry Debit Cards! Samsung Pay App Allows You To Swipe Cards On POS Using Your Mobile