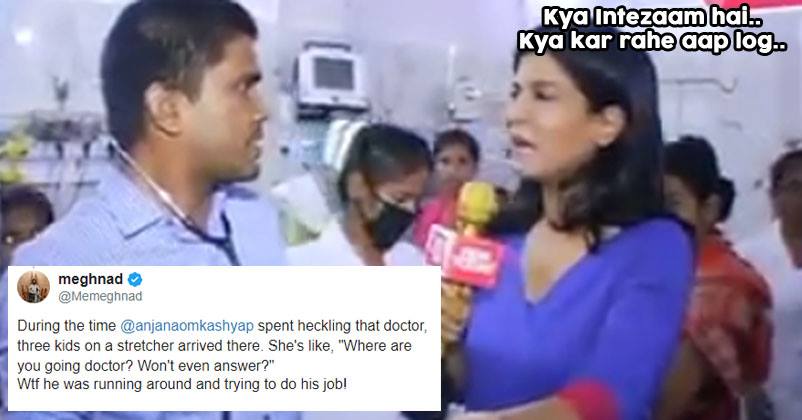 Acute Encephalitis Syndrome has taken the lives of more than 127 children in Bihar and 108 of them are from Muzaffarpur. Each day more and more people are rushed to the hospital for treatment.

Recently, the executive editor of India Today and Aaj Tak Anjana Om Prakash covered the news of Encephalitis Syndrome in Bihar from Shri Krishna Medical College and Hospital in Muzaffarpur where more than 290 kids are admitted in critical condition.

Anjana Om Prakash entered the ICU to interact with the patient parties, doctors and the nurses leading which was live broadcasted. Anjana stopped the doctors from treating the patients and the ward attendants in the middle of their work just to interview them.

– @anjanaomkashyap hv some shame. u're behaving like a stulid fool.Whr is the doctor supposed to keep the kids when there are no facilities?You're scolding a doctor on duty!You should be reprimanded by ur channel head @aroonpurie for unethical journalism.pic.twitter.com/kNPnffhwnV

In the news broadcast on Wednesday Anjana was seen asking the doctor where will he adjust the patient lying on the mobile stretcher and even started questioning the doctor hygiene and infrastructural failures in the hospital. The interview turned into interference where the chief executive editor believed heckling the doctors in an ICU ward from their work is important than heckling the Health Minister and the Chief Minister.

Anjana is also being called out as a biased journalist. Well, when Delhi was severely affected by dengue Anjana in her news segment questioned the ruling party of Delhi, but when the children of Bihar are losing their lives cause of Encephalitis Syndrome the executive editor is seen blaming and questioning the doctors rather than the authority. Ironical right?

Anjana received sharp criticism on social media and we are left wondering who gave her the rights to walk inside the ICU of a hospital with her camera and mic. Twitterati is questioning her unethical journalism:

@anjanaomkashyap Where were u 4 last 18 days? Were u waiting 2 toll of #BiharKidsMurder cross d Hundred mark like @NitishKumar? Did u ask any question 2 NDA Govts of state n center ? Oh Sorry u were busy in leg pooling Bengal govt as per d instructions of ur boss #Modi_Shah

The doctor shld have given her a befitting response of getting out of the hospital and letting them do their work. Such a journalist who rather than doing her work is trying to create sensation… Is indeed a shame to journalism

She should be booked for stopping doctor to do his duty. How, dare she stops doctor?

This woman was deliberately obstructing a doctor and nurses from doing their duty inside an ICU! Are duty doctors answerable for the miserable condition of public health infra?
Mangal Pandey – Health Minister of Bihar – is from BJP. Did she question him?pic.twitter.com/J9xqmkzDfS

During the time @anjanaomkashyap spent heckling that doctor, three kids on a stretcher arrived there. She's like, "Where are you going doctor? Won't even answer?"

Wtf he was running around and trying to do his job!

Who allowed @anjanaomkashyap inside the ICU? Is she a Doctor? Is she a Nurse? She is just uttering illogical words and wasting valuable time of the doctor. She is creating nuisance inside the ICU. Is this Journalism?I am shocked. Shame On You Anjana. #MuzaffarpurChildrenDeath pic.twitter.com/JDTAw9YntF

Disgusting behavior by #AnjanaOmKashyap. Instead of doctors doing their job, she wants them to chit chat with her on cam. Created a ruckus in the hospital. And the audacity – won't question the govt that's at fault for bad health facilities, but goes around screaming at doctors!

Harassing working medical staff in a ward full of very sick children is not reporting, it is inhuman. Just for TRPs they create a circus! #AnjanaOmKashyap should be ashamed! pic.twitter.com/DZbDGk0JUL

For days didn't even made it prime time debate topic. Suddenly, this much drama. Hypocrisy is thy name TRP waali News Actor (Anchor).

It is extremely shameful that how year long she never raises the issue of low spending in health at only 2.5% of GDP: compare this with WHO data worldwide available online, shortage of Resident Doctors esp. PGs & after visiting she is misbehaving with DoD.@anjanaomkashyap

This is not what Journalism is and being a senior journalist if Anjana isn’t aware of it. Well god, forbid this ruckus!

This 10 Year Old Boy Travels 14 Kilometers Daily Just To Draw Two Cans Of Water
Dr. Kafeel Khan, Who Was ‘Arrested’ Even He Reached Bihar To Help. Where’s Government Though