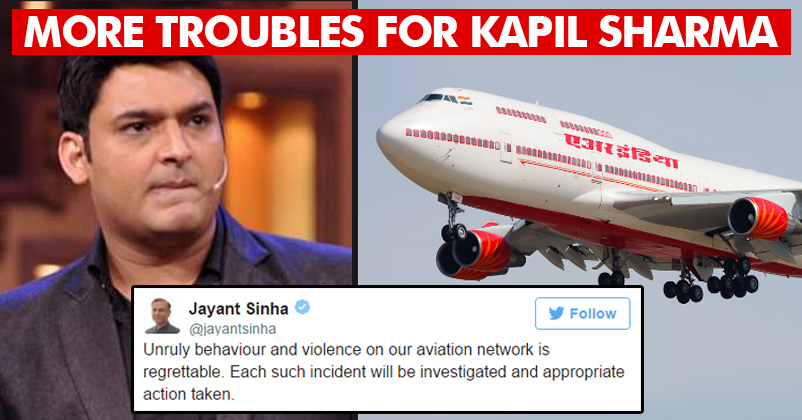 Kapil Sharma’s never-ending list of worries continues its saga. After being accused of excessive drinking, misbehaving and arrogance, the comedy star is yet again in the news for all the wrong reasons.

His fight with Sunil Grover mid-air on the Melbourne – Delhi flight became the talk of the town. Kapil Sharma created a scene after gulping down a few drinks. The star abused, insulted and humiliated his team members. As described on leading websites, Kapil even indulged in a physical fight with Sunil Grover, which other passengers were witness too. Their fight was so aggressive that even economy class passengers could see the fiasco. Well, the consequence of this fiasco is out for all of us to witness. The latest development suggests that Air India is taking a strict action against Kapil. As TOI reported, AI chief Ashwani Lohani has made a report on Kapil’s misbehavior on the Melbourne-Delhi flight (AI309) on March 16th, 2017.

A warning against Kapil Sharma for his behavior on the flight is already issued. Jayant Sinha, Minister of State For Civil Aviation, tweeted about the same in an indirect manner. He mentioned about unruly behavior in flights and the appropriate action to be taken against the same.

Unruly behaviour and violence on our aviation network is regrettable. Each such incident will be investigated and appropriate action taken.

We don’t know how true these reports are, we even don’t know if the description of the entire fight by the sources is true or not. All we know is that we want our favorite comedy stars to come together and sort out their differences. We are missing The Kapil Sharma Show. What do you all feel? Let us know in the comments section.