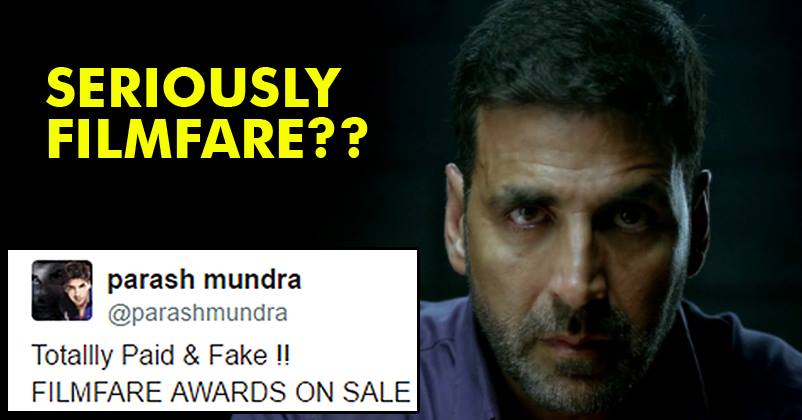 What makes a person strive harder towards excellence? Perhaps the motivation that he gets on his journey. These motivations and inspirations can be materialistic as well as a self-satisfactory feeling. Since the last 3 years, Akshay Kumar has delivered some of the beautiful gems to our Bollywood Industry that have set the benchmark for various things. Be it’s acting, dedication, focus or sheer brilliance, he has just set a different standard for himself. In the year 2016, he delivered two blockbuster movies – Airlift and RUSTOM which were loved and admired by many people. Both the films did fairly well on box-office (crossing 100 crores) and were also admired by the critics. However, recently Akshay Kumar and his movies were ignored in the nomination for the BEST ACTOR and the BEST MOVIE of the year 2016 in the Filmfare Awards. It’s not about winning the awards, it’s about worth considering the efforts put in by an artist in his work. As soon as the nominations were announced, Akki’s fans took it to twitter to show their disappointed through series of tweets. The level of frustration among his fans was so much that a hashtag – “FILMFARE AWARDS ON SALE” is now on trend. Have a look at some of those tweets.

Not even a nomination ! !

Is it really fixed ?

I think everything is already fixed before the awards ceremony and thats the reason @aamir_khan never shows up.."FILMFARE AWARDS ON SALE"

Even I want to BUY the best Script Writer Award

I wanna be a best female playback singer at @filmfare .Can I ? By which currency should I pay ? US$ ,Euro ,INR etc FILMFARE AWARDS ON SALE

WTF is wrong with you guys ! !

FILMFARE AWARDS ON SALE
WHAT THE FUCK!! No Manoj Bajpayee… No Akshay Kumar… Are you serious with bullshit!!!!

Well, the only thing that I can say is that the frustration of his fans are totally justified. It’s the high time for the FILMFARE to start respecting the art and not the fakeness that are apparently shown in our theatres, otherwise the time is not so far when people will start disowning the worthiness and respect that FILMFARE had earned throughout its journey of 62 Years. What are your views regarding this issue? Please share your opinion in the comment section below.