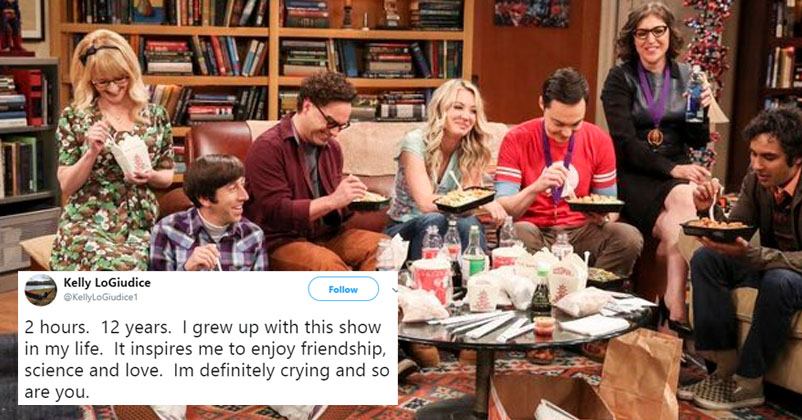 American sitcom The Big Bang Theory aired its last episode and finally concluded leaving fans emotional. The last episode was full of surprises including behind the scenes and two months leap. Just after the final episode aired on CBS, the internet started steaming with heartfelt goodbye messages from the fans to the actors and the show.

Jim Parsons, who plays Sheldon Cooper in the series shared a final photo of the cast and wrote, “It was really hard to pick the right pic for this post, so here is a shot of us in a hug after we filmed the last group scene we would ever film for the series…”

It was really hard to pick the right pic for this post, so here is a shot of us in a hug after we filmed the last group scene we would ever film for the series… and TONIGHT is THE NIGHT… it’s the series finale at 8pm EST and then there’s the Young Sheldon (season!) finale, and then a special behind the scenes show hosted by @kaleycuoco and @sanctionedjohnnygalecki and then the entire cast is on @colbertlateshow I hope you get a chance to tune in and i hope you enjoy all of it. If you enjoy it even half as much as we’ve enjoyed (LOVED) creating this show for the past 12 years, then that’ll be a WHOLE WHOLE lot of enjoyment. All of us will miss seeing you in this format, but we will be around in all sorts of ways, I assure you… love love love ❤️❤️❤️

As much as the final episode made fans emotional, they were not disappointed by it. It was the 12th season of the show with good viewership.

Here are some emotional tweets from the fans:

If you need me, I’ll be in the corner singing soft kitty. #BigBangTheoryFinale pic.twitter.com/qNg2NaahEp

One of the moments everyone has been waiting for… The darn elevator lol #BigBangTheoryFinale pic.twitter.com/UesbwVOuyE

2 hours. 12 years. I grew up with this show in my life. It inspires me to enjoy friendship, science and love. Im definitely crying and so are you. #BigBangTheory #sheldoncooper #BigBangTheoryFinale @bigbangtheory pic.twitter.com/8IMnIQIhKZ

I predicted the elevator getting fixed, and one might foresee Penny getting pregnant, but I never expected to see Halley and Michael. 😂☺#BigBangTheory #BigBangTheoryFinale

I never had such strong feelings about an elevator before #BigBangTheoryFinale

The elevator!!!!!! I screamed!!!!! The writers are genius I always said when it ended the elevator had to work #TheBigBangTheory #BigBangTheoryFinale pic.twitter.com/YaxPqzCKdC

Hilarious Video Of This Tik Tok Couple Is Going Viral
Shreya Ghoshal Gets Angry On Airlines For This Reason, Her Fans Totally Have Her Back