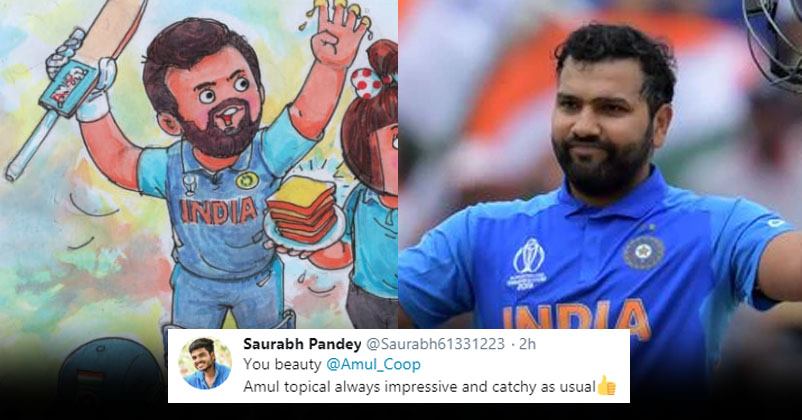 Rohit Sharma against Pakistan and South Africa in India’s opening game. He also scored a ton against England and Bangladesh recently. Sourav Ganguly and Sachin Tendulkar have scored three centuries at a single World Cup but Rohit shined when he scored 4 tons in World Cup and becomes the first Indian to do so.

Many people appreciated and congratulated the player and so did Amul in its own unique way. Amul is known for making illustrations and cartoons to praise. Amul did it again with this illustration of Rohit Sharma with the caption,” #Amul Topical: Rohit Sharma, first Indian to score four centuries in a World Cup!” The illustration had Rohit’s cartoon with the lines,” Four tons favor the brave”.

People soon flooded in and appreciated Amul for its catchy tweet!

Superb 👍🏻👍🏻👍🏻👍🏻 Would like to see the Team behind this ideas every week…. I am a great follower of your ads since my childhood….

Amul is always surprising us with these cute little illustrations.

Anurag Kashyap Lashes Out At Rangoli Chandel For Calling Taapsee Pannu “Sasti Copy”
CIA Reacts To Instagram & Facebook Down, Says ‘We Didn’t Cause it’