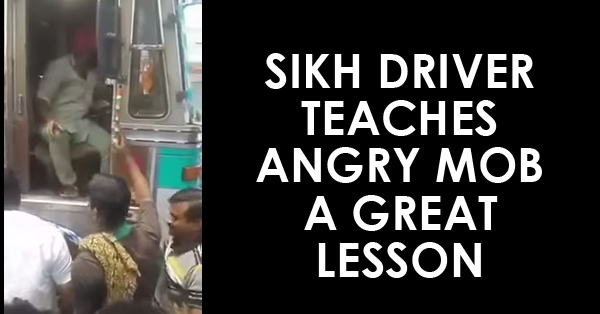 If you are driving a vehicle and end up crashing up another vehicle or a pedestrian, It wasn’t even your mistake but unfortunately you were driving a bigger vehicle than his/her then it was your Fault. Welcome to India where at the occurrence of any accident on the road, the mob without even knowing or understanding whose fault it was just assume and start swearing the person who had a bigger vehicle. Nobody even cares to listen to the person with the bigger vehicle his reasons or explanations. The mob just tries to pull the person off the vehicle and beats the hell out of that person.
In the case of Truck Drivers & Bus Drivers things are even worse. Nobody takes steady interest in hearing to what the drivers say. They just Pre-assume the driver was either drunk or he might have slept and he drives rash.
In a similar case of some place in India. This Sikh truck driver is being sacked for crashing into a car in front of him. The driver continuously requests the people and tries to explain them that it was not his fault. But the mob isn’t even bothered to listen to him and starts swearing him and tries to pull him out of the Truck. When the Sikh driver denies, couple of people start even beating the driver and pull his hands and legs. Pertaining to which the driver gets and angry and does this. You will be shocked to see what happened next.

What do you think? Who was right? Is it not fair to listen to the Truck Drivers before pre-assuming that it was their fault and get an upper hand on them. Share your views in the comments section below.