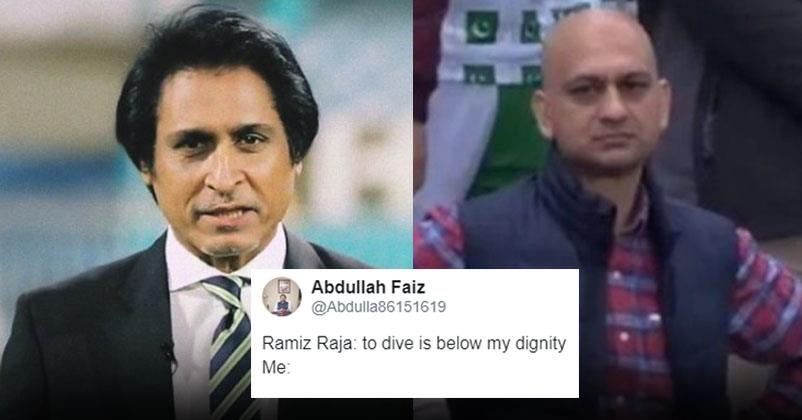 Nothing goes unnoticed from the eyes of the camera and it had made several overnight stars like the RCB girl during the IPL. The camera once more caught and made a man famous online due to his angry reaction from the stadium during a cricket match.

A Pakistan cricket team fan was spotted during Australia vs Pakistan match of the ICC world cup on Wednesday. The man looked angry and disappointed in his team getting beaten up by the hands of Australia. Millions of viewers witnessed his reaction on screen and made him famous within hours.

Even ICC shared the man’s reaction watching the poor performance of his home team, in the form of the GIF on its official Twitter handle.

While the man was angry with his team, twitterians found him funny and started making jokes and memes out of his misery. Have a look at some of them here:

Pakistan batsman giving away their wickets in a poor way

Ramiz Raja: to dive is below my dignity

Aamir watching his efforts ending up in smoke :#AUSvPAK pic.twitter.com/WR2e5skxUU

Imam Ul Haq played 75 balls for his selfish fifty and inzamam be like "Naak katwa do Meri sifarish ki"#AUSvPAK pic.twitter.com/8uTdI4tTh0

"when u r following her from 2 years and she says she likes u but as a friend…."😜#CWC19 #AUSvPAK pic.twitter.com/byIG6s2mWr

The man explained to the ICC commentator that his reaction was over a dropped catch in the field. He said, “I could see it land in his hands and then he dropped it. It was really disappointing to see it happen just in front of me and I couldn’t say anything.”