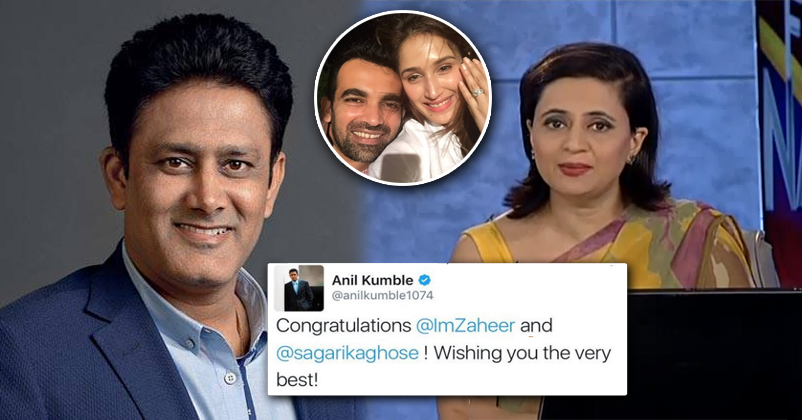 Zaheer Khan and Sagarika Ghatge’s relationship finally became official yesterday with the former announcing the engagement news on Twitter. Sagarika and Zaheer were spotted together at Yuvraj and Hazel’s reception and since then, there were too many speculations about their affair. After Zaheer made this “Big announcement” on the social media platform, many cricketers and fans showered their good wishes and wished them luck for the future. However, there were 2 tweets that gained all the limelight; one was a tweet by Anil Kumble and the other was a tweet by Delhi Daredevils.

Yes, they goofed up by tagging the wrong Sagarika; LOL, they tagged Sagarika Ghose (Wife of Rajdeep Sardesai), who’s a journalist with IBN. Check out what Anil tweeted… As soon as Sagarika Ghose saw this tweet, she made them realize this BLUNDER. Sagarika also said that she’s already a mother of 2, haha! Delhi Daredevils tweeted how they were excited on Zaheer’s news, due to which they didn’t realize that the “Wrong Sagarika” was tagged.

We were so elated by the news that we got carried away. Apologies for the miscommunication. We wish the fine couple a great life ahead.

It seems Anil Kumble was too late in deleting his tweet; by then, his screenshot had gone viral. Check out how Twitter users trolled him…

War between Anil Kumble & Zaheer Khan out in the open. 😂😂 pic.twitter.com/Hiz7iYbrj3

Rajdeep will have sleepless nights!

Twitter users had a field day; Anil Kumble must have been embarrassed with Sagarika Ghose’s tweet which is why he deleted it immediately.

What’s your take on this? Share your views in our comments section below.

Zaheer Khan Is Engaged! He Announced The News On Twitter & Shared A Pic With His Lady Love
SRK Wants Dhoni In The KKR Team! Says He Can Go To Any Extent To Do That!