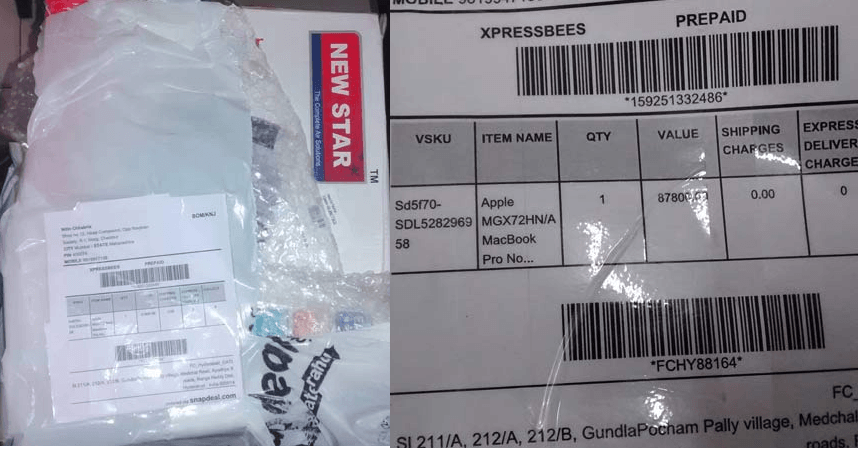 This is not the first time when Snapdeal has done this kind of delivery scam. It’s pretty normal for Snapdeal to do this. We recently saw below fraud cases by Snapdeal:-
A piece of wood was delivered when a customer booked and ordered for IPhone.
Man Ordered A Samsung Smartphone From Snapdeal But Received Soap Bar
Snapdeal Does It again: Deliver Second Hand Phone To Customer

And, yet again history repeated itself.

Mumbai-based Nitin Chhabria ordered a 13-inch Apple MacBook Pro worth Rs 87,800 but when he checked the parcel, he saw a New Star Fan Heater, worth Rs 600 instead. Chhabria said that he was suspicious the moment the delivery man handed him the parcel since it was pretty small and it could not hold 13-inch laptop. He asked delivery boy to wait and opened the parcel in front of him. When he opened the parcel, he was shocked to see Rs 600 worth heater inside it. He was really worried as it was not Cash on delivery order unlike previous one where man received second hand phone. He paid Rs 87,800 via his credit card It’s not first time when Snapdeal has done such kind of mistake and it could be because of lack of not having its own logistics network unlike Flipkart or Amazon. Whatever could be the reason of this mishap but this will leave a very bad impact on customers and they will think twice before ordering anything on Snapdeal.

What do you think Snapdeal can do to stop such kind of mistakes? Or you will prefer shopping on Flipkart or Amazon instead of Snapdeal? Please share your bad shopping experience in comments section below.

A Smartphone With 320 GB Of Storage
Blast in Satara, Maharshtra: 3 Dead