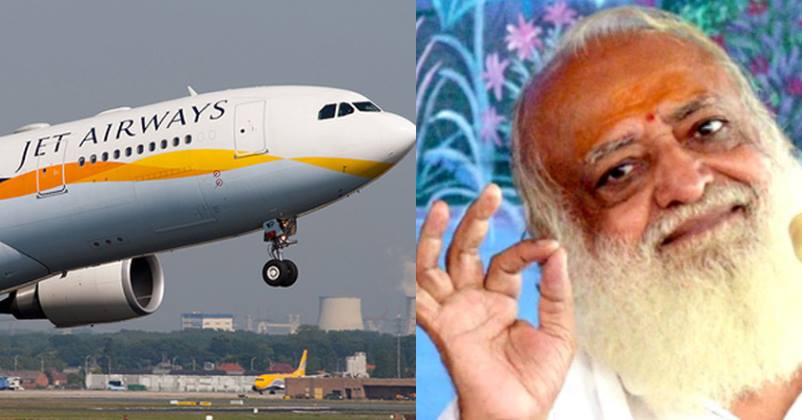 It is always funny and humorous to listen ‘Flight jokes’ and many such things that happen at the Airport when passengers travel for the very first time. But the tale of Jet Airways Flight travelling from Jodhpur-Delhi isn’t that funny. It is perhaps the most pathetic thing that you can ever expect in your life. Travelling in a bus with closed windows is in itself a big challenge for many of us. Travelling in a flight flying at 35,000 feet without any working air conditioner and water is something that you will never expect in your life. But the fates of people travelling in that flight weren’t that lucky. Jet Airways Flight No. 9W 2552 was originally scheduled for an 10:30 departure, but later got delayed multiple times. The reason for this delay is Asaram Bapu for whom the flight authorities were WAITING. There were no announcement made regarding this delay and no boarding procedure had started unless Asaram Bapu came in with the government official cops who formed a periphery near the airport security. As soon as he came into the airport, the boarding procedure started in no time and finally the passengers were allowed to board the flight. However, to their dismay, the air conditioner of the plane wasn’t working at all and to make matters worst, there were Asaram Bapu’s devotees who were creating a chaos by constantly chanting his name in a hot, jammed packed and suffocated flight. One of the passengers described this situation as worse than Paranoia, stating that such people don’t deserve to the category of ‘devotee’ but belong to the category of ‘hooligans’.

There were no instructions given by Jet Airways crew members about the safety exits, oxygen masks and many other things. It is reported that Asaram Bapu’s devotees were constantly getting up from their seats during the time of takeoff and those who were sitting back weren’t using their seat belts. Asaram Bapu’s supporters rushed to take his blessing as soon as the flight took off from Jodhpur. This incident led to a huge chaos in the flight which resulted in a dangerous situation, as the aircraft began to tilt back and forth. Understanding the gravity of the situation, the pilot immediately asked the passengers to sit down and fasten their seat belts.

“After an hour during the flight, the pilot finally made the announcement of a ‘small technical glitch’. People around began getting nauseous and begged for water but there was none provided by the crew who seemed to be only too caught up in asking Asaram Bapu’s followers to calm down and stay seated on an extremely turbulent flight”, quoted by one of the passengers

After the flight was landed, few passengers went on to meet the ground staff of Jet Airways to complain against such a pathetic experience; they were too reluctant to react to it and asked the passengers in a carefree attitude to write the complaint to their Guest Relations team who would get back to them in two-three days’ time.

However, the tantrums of Asaram Bapu didn’t end up here. He insisted or more precisely demanded to get off the aircraft along with his devotees, which made the situation even worse for the police. There was complete chaos around him and airport staff also joined in to take his blessings. Finally police had to use force to disperse the airport staff and supporters and reported this matter in to the court. Catch this video recorded by one of the passengers from the flight.

This portrayal of 1.5 hours of journey of the Jet Airways Flight in text is good enough to send chills down to my spine. It is just hilarious to see how people are still having a soft corning for the man who is now out on a bail accused of raping a minor.

Salman Khan’s Dad Slams Nawaz Sharif With A Series Of Tweets After The Brutal Uri Attack!
8 Misconceptions That Rest Of India Has About Delhiites