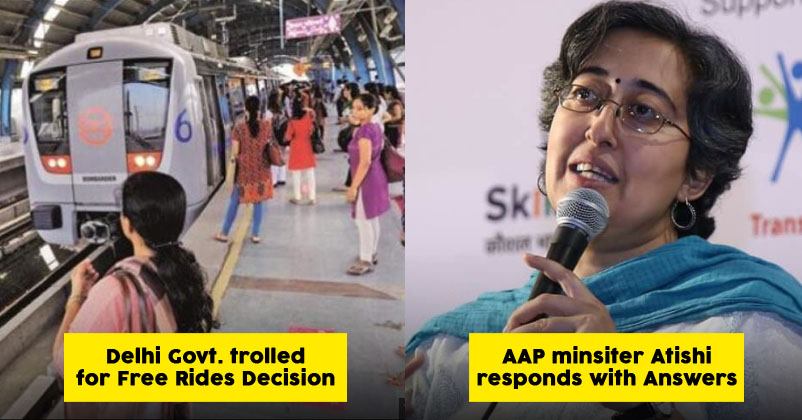 Aam Aadmi Party government is planning to make commuting free for all females. In a Facebook post updated recently, AAP politician Atishi Marlena talked to length about this revolutionary decision by Delhi government. She answered some questions which many would have.

On, how could free travel make travel safe for women, Atishi clarified that 33% of Metro commuters are women and the fare hike last year has affected them a lot. They are now forced to shift to more unsafe modes of transport like private buses, ride sharing, or even walking. Atishi stated that making commuting free for women will help them return to the Metro’s safety. More women in any public spaces automatically make those spaces safer for women. This move will help women reclaim public spaces.

And Atishi also assured that no one has to worry about the financial viability of Delhi Metro. The ticket revenue lost by Delhi Metro will be compensated fully by the Delhi government, she confirmed.

What? Now metro overcrowding is troubling you? Well, Atishi has an answer to this also. She says When Phase 3 was planned, the estimated capacity was 40 lakhs ridership daily. But at the moment only 25 lakh commuters are using it, which is 15 lakh less than capacity.

So, ladies you got to be relieved now, it won’t be more crowded than it already is.

Atishi’s questionnaire also had a point about men. Why don’t men need a subsidy on Metro travel? In her post, she explained that though men also need financial assistance, they don’t have any security issue. With an example, she described that men have the option of taking two-wheelers to work or using ride-sharing apps without concern for their safety.