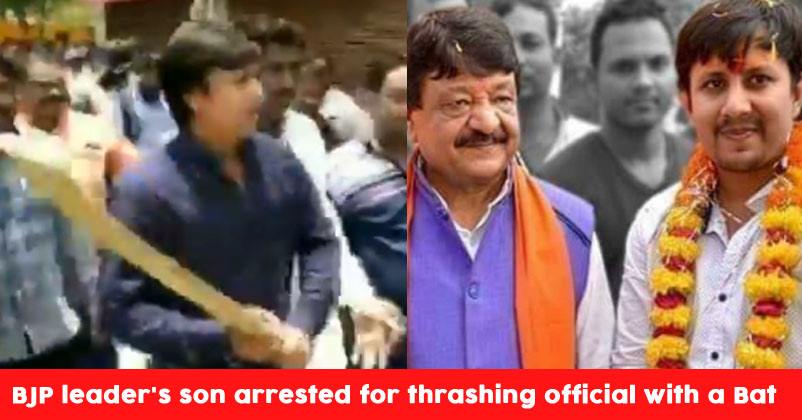 Son of BJP senior leader Kailash Vijayvargiya and MLA Akash Vijayvargiya attacked a municipal corporation officer with a cricket bat in Indore. The video of the attack went viral and an FIR was filed against him and ten others, after which he was arrested, an official said.

In the video, the BJP MLA can be seen beating the officer brutally. He was surrounded by media persons who recorded the whole incident in their cameras. Akash had other people following him and doing the same with the officer.

Explaining his behavior, Akash said, “In the BJP, we have been taught, Pehle aavedan, phir nivedan aur phir danadan (first, appeal, then request and later thrash them).”

#WATCH Madhya Pradesh: Akash Vijayvargiya, BJP MLA and son of senior BJP leader Kailash Vijayvargiya, thrashes a Municipal Corporation officer with a cricket bat, in Indore. The officers were in the area for an anti-encroachment drive. pic.twitter.com/AG4MfP6xu0

Akash told the reporters later, “I told them (the officials) to leave in 10 minutes and said we couldn’t tolerate it any longer. I am an elected representative. It is my responsibility to sort out the issues between the residents and the authorities. I was making every effort. But the civic body officials were indulging in dadagiri and weren’t listening to the people.”

Junior Vijayvargiya has been denied bail and send to jail till July 7. The case against Akash has been registered for assaulting, rioting and obstructing government work.