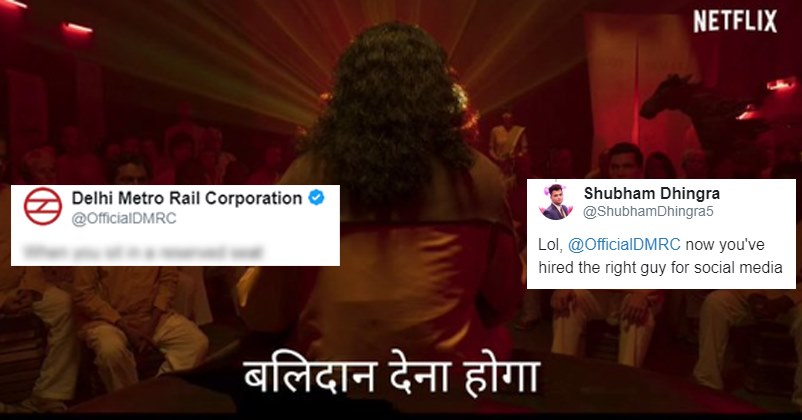 Sacred Games has been the talk of this season, after waiting for a month Netflix finally dropped the trailer of Sacred Games 2, it is one of the most awaited series. Sacred Games took people by storm. The much-awaited series will release on the 15th of August, and we can’t wait for it, can we?

After the trailer of Sacred Games 2, was released a lot of memes were inspired by it. The famous dialogue from Pankaj Tripathi’s “Balidaan dena hoga “(there has to be a sacrifice) became a platform for memes. People worked up their creativity to give up the best results, and so did the Delhi Metro.

In a recent tweet by Delhi metro they quoted the famous dialogue “Balidan Dena Hoga” from Sacred Games 2, the tweet read,” When you sit in a reserved seat:#SacredGames2″. The tweet was about to give up the places for the senior citizens, the differently-abled, and women.

When someone for no reason offers you his seat in delhi metro. @OfficialDMRC #sacredgames2 pic.twitter.com/DHduWD3ju5

When a male passenger is not ready to give his “ladies only seat” to a female passenger. #sacredgames2 #dmrc @OfficialDMRC pic.twitter.com/TSzvyEMgIo

😂😂😂It's seems this guy is a big fan of #sacredgames .
By the way this is a good msg from @OfficialDMRC .keep it up

@OfficialDMRC is getting more social. Keep it up

This tweet shows that this sure a funny and entertaining way to spread messages.

Goa Politician Bashed On Twitter For Calling Sleeping passengers On Airport ‘Cheap’
Yesterday Movie Review: A Glowing Tribute To The Beatles And Their Music