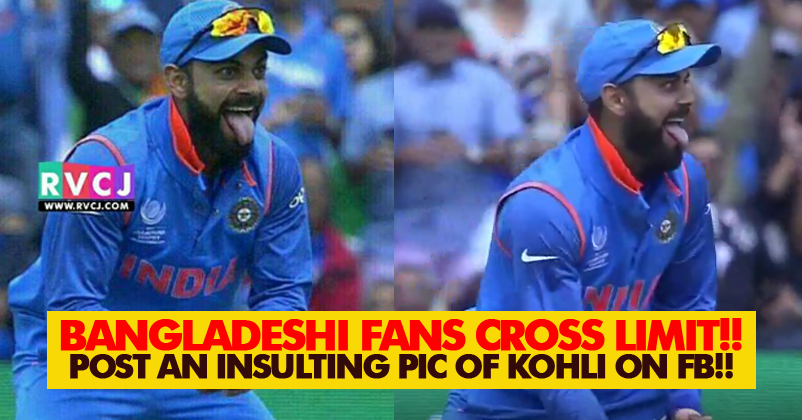 Virat Kohli is one of those cricketers who are watched by the fans or media all the time and whatever they do on the field or off the field makes headlines. The semi-final of ICC Champions Trophy 2017 between India and Bangladesh is being played at Edgbaston and the whole world is watching the match because the result of this match will decide which team is going to face Pakistan in the finals. The Bangladeshis have started considering India as their arch-rivals and leave no chance to troll them by means of derogatory posts and memes.

During today’s match in the 36th over of Bangladesh innings, Kedar Jadhav bowled a full toss to Bangladesh batsman Mushfiqur Rahim; he lofted the ball and it was caught by Indian skipper Kohli. The celebrations of taking a wicket were started by the Indian team but Virat Kohli celebrated it in a different manner by taking his tongue out like this: The fans of Virat Kohli just loved it but a Bangladeshi Facebook page once again tried to insult the Indian skipper by comparing him to a dog in this manner: We all know that winning is important in a game but Bangladeshis should remember that by posting such mean stuffs, they are showcasing their mediocre attitude and lack of sportsmen spirit which is quite necessary in any sport.

What do you have to say about it?

These 15 Memes Show How Bangaldeshi Fans Crossed Their Limits To Troll Team India
13 Memes To Celebrate India’s Victory Against Bangladesh! India Has Defeated Them Like A Boss!