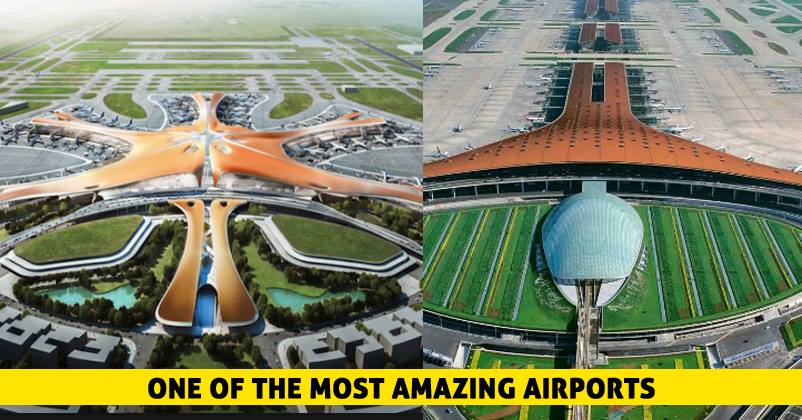 Our neighbour country China always stays in news for building new and exciting things, technological transformations and being super fast in the population management.

We already know how brilliant their roads and traffic controlling structure is. It was earlier this month, that China banned 553 car brands in their country to counter the increasing air pollution. Just a few days back they built world’s largest Air Purifier to fight the air pollution.

And now China is again in news for something even more impactful.

China’s Beijing has built a new International Airport which has taken the online world by storm. The development of the airport started back in December 2014 and the test operation will start from October 2019. However, the magnificent vibe of the airport has become a topic of discussion worldwide.

The Beijing Airport which is supposedly among the world’s largest airports is being built at an estimated cost of 80 billion yuan (12.3 billion US dollars and Rs 78,500 crores approx), reports CGTN.

As per Xinhua reports, the airport is spread over 313,000 square meters. The airport terminal buildings will have four runways and will be able to accommodate 620,000 flights every year along with up to 100 million passengers and 4 million tonnes of cargo.

The need for a new airport in Beijing arose as the previous airport was overcrowded. This one is expected to provide a lot of relief.

The pictures of airport have been going viral on the social media and are getting amazing reactions from people. There are many people who are also comparing it with an airport straight from a sci-fi movie.

Have a look at the pictures-

Beijing's new international airport to start test operation in October 2019. It will be able to handle up to 100 million passengers and 4 million tonnes of cargo annually https://t.co/7GdhV6TM7Y pic.twitter.com/COlu0qfazz

Also check out some reactions-

Continue Reading
You may also like...
Related Topics:Beijing, china

WhatsApp Will Launch A Feature That Will be Loved By Group Members But Admins Will Hate It
Bad News For Committed People. This New Feature On Instagram Can Ruin Your Relationship