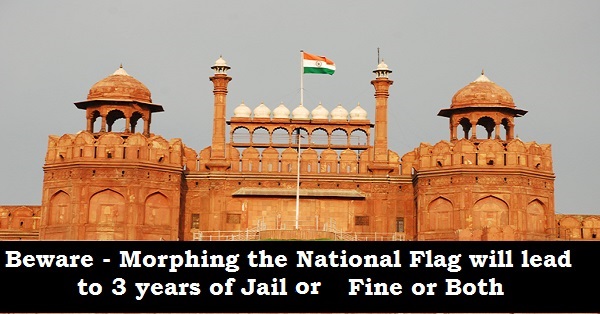 National Flag and National Anthem are considered as the National Symbols of the Country. Flag of India is known as “Tiranga” means Tri Colour. It was adopted on 22nd July 1947. Tiranga or Flag of India is Based on Indian National Congress Flag , Swaraj Flag which was also Designed by  Pingali Venkayya. Flag of India consists of Saffron, White and Indian Green with a Navy Blue Wheel comprising of 24 Spokes in the Middle, the Wheel is Known as Ashoka Chakra.

Prevention of Insults to National Honour Act, 1971 states the following Penalities for Disrespecting the National Flag.

All the Below can may be termed to an Imprisonment of 3 Years or a Fine or Both.

On the eve of Independence Day Let us Take on Oath of Respecting our National Flag at any cost.