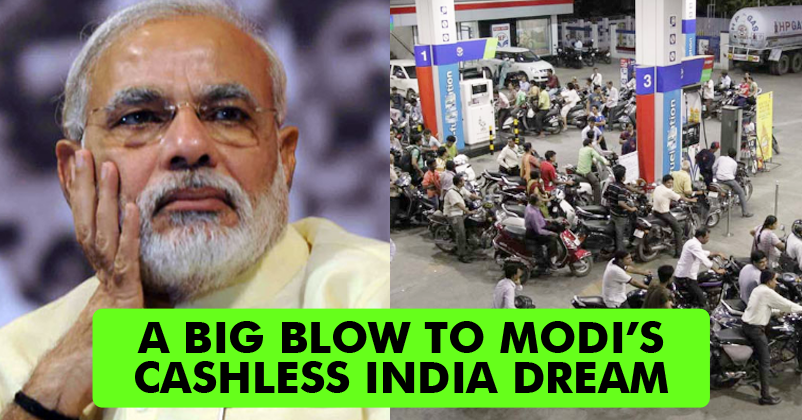 PM Modi is striving hard towards his dream of cashless India and demonetization was a major step! He has been launching new steps towards digital India, another one being the BHIM app. Everything was going on smooth until this happened.

Well, there’s a big obstruction in PM Modi’s cashless India dream; in fact you can say it is a big blow to this digital India move. Getting restless to know what?

Well, petrol pumps will NOT accept cards from tomorrow; only cash payments will be accepted. This decision was taken after a 1 percent transaction fee was applicable on card payments, which has to be borne by petrol pump owners. Customers will not be affected as they don’t have to pay an extra surcharge while making card payments.

Banks sent sudden notices yesterday, about this 1 percent surcharge on card payments and this took the Oil Ministry by surprise. This is the reason why plastic money will be stopped from Monday.

HDFC and ICICI bank account for over 60 percent of the machines across the country and this move will surely cause a lot of inconvenience.

As of now, Ministry officials have asked to put this move on hold and discuss some mid-way out. A detailed discussion between petrol pump owners, banks and stakeholders-state run fuel retailers is going on.

Ajay Bansal, the president of All India Petroleum Dealers Association stated that they are firm on this decision of withdrawing card machines from the today midnight. Earlier 0.75% cashback was offered by the government to promote cashless transactions, now they have implied 1 percent surcharge on card payments; this is surely going to cause a lot of problems in this time when there is severe cash crunch.