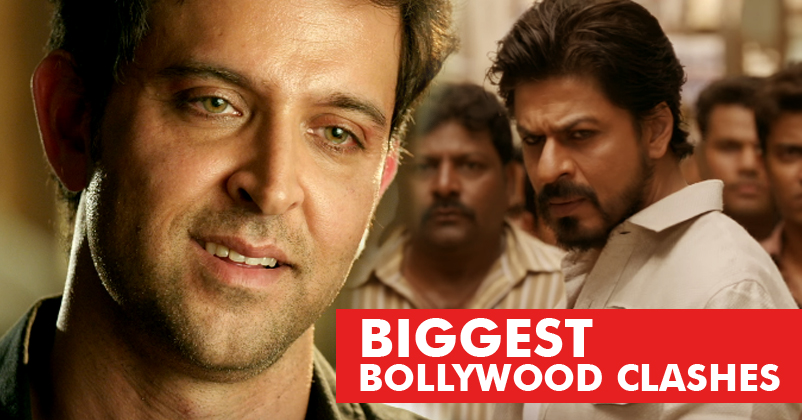 Clashes! The worst thing that can ever happen to a movie! With the release of numerous Bollywood movies each year,  clashes are just unavoidable. For all you movie buffs who wish to know about the 10 biggest Bollywood clashes, here is the list: 18th of December 2015! Yes, this is the date when two biggies, ‘Dilwale’ and ‘Bajirao Mastani’ clashed with each other. We all know Bajirao Mastani won the battle convincingly beating SRK’s Dilwale! The release of ‘Lagaan’ and ‘Gadar’ on 15th of June 2001 is considered to be the biggest clash in Bollywood till date. On one side there was Lagaan, which was nominated for Oscar and on the other side, there was ‘Gadar’, which broke all records of box office collections. There were rumors of discrepancies between Shahrukh Khan and Ajay Devgan after the release of 2 big hits, ‘Son of Sardar’ and ‘Jab Tak Hai Jaan’ on the 13th of November 2013. Although both the movies made an entry to the 100 crore club, Jab Tak Hai Jaan proved to secure a better position than Son of Sardar. On 9th November 2007, director Sanjay Leela Bhansali released ‘Saawariya’, introducing Sonam Kapoor and Ranbir Kapoor. However, this must have been his biggest mistake of life as he launched it with Shahrukh Khan’s film ‘Om Shanti Om’.  However, in front of ‘Om Shanti Om’, the film failed miserably. The release of Aitraaz and Veer Zara was seen during Diwali, on the 12th of November 2004. Both the films became equally popular on the Box office. However, in terms of collection, Veer Zara scored better. On 20th of October 2006, Jaaneman and Don clashed each other. In this competition, Shahrukh Khan proved to be the king with his film ‘Don’, while Jaaneman had to face the brunt of failure. The release of these films in the year 1990 was also considered to be among the biggest Bollywood clashes. Both the films gained immense success. While Ghayal proved to be a trend setter, Dil got popularity as a romantic movie. Vidhu Vinod Chopra took the decision of releasing Mission Kashmir along with Mohabbatein. However, in front of King Khan, no one could save the fate of Mission Kashmir. Mohabbatein stood out to be quite successful. Rustom proved to be a clear winner here. It was a nail-biting situation as to which movie would win “Mohen jo Daro” or “Rustom”! However, Akshay Kumar showed his magic and helped the movie garner awesome collections with his stupendous acting. After sailing through loads of controversies, finally both the movies have stuck to one release date i.e. 25th of January 2017. On one side it is SRK’s star power and on the other side, we have Hrithik’s charm. Extremely difficult to even predict the winner now! Let’s see what happens…

Akshay Kumar’s Gesture For Ranveer Singh Is An Example For All Celebrities! Check What He Did!
2nd Day Collections Of Befikre Are Out! 23 Kisses Have Done The Magic In Numbers Once Again!