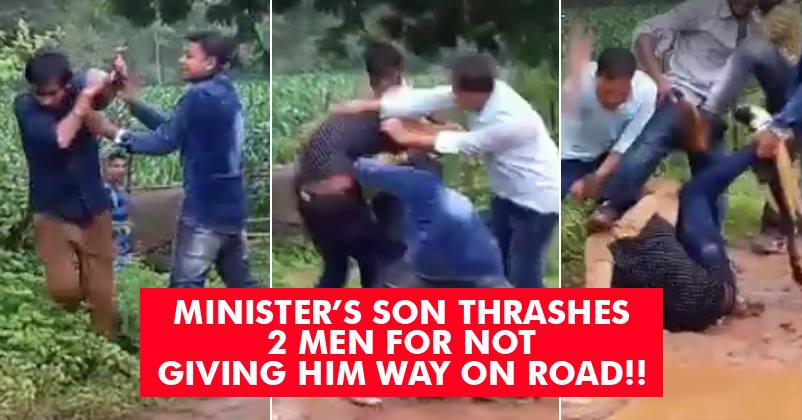 I wish there were some more synonyms for the word like ‘Douchebag’ but by God’s grace we have now this man who gives us a complete picture of how ‘Bullies’ look like. The reason for my outrage is simply because of this video where the BJP leader’s son thrashes bikers just because according him, they didn’t give him enough space to drive. Watch the video.

The incident reported in the video was shot at Pakahanjur in Kanker, Chhattisgarh. The video was recorded by a passerby which dated 15 August 2016. Just after sharing it on some video streaming sites, the video became viral through many Whatsapp shares.

The main culprit in the video who is shown kicking & punching the bikers is alleged to be Mannu, son of BJP Leader Manturam who was earlier expelled from Congress. Along with Mannu, there are many other people shown in the video who are committing the same heinous crime. The identity of these people are yet to be disclosed. I totally agree with the point of getting frustrated for not getting enough space to drive when a group of bikers hovers around your car, but getting down on road and beating the shit of them was not a civilized way to behave. Secondly, we can’t rule out the possibility of such VIP people always getting things done in hurry, DRIVING TOO ! !

According to some reports, Mannu even threatened the bikers of dire consequences if they go ahead for filing a police complaint against him. When the video got viral and reporters question Mannu’s father Manturam about the whole incident, he responded by saying that such kind of things are normal in such road rage cases. However, the good news about this incident is that Manturam also said that police is free to take any action against his son. But it is the time which will tell how honest and sincere are his words. Although according to Police of Kanker district, no complaint against Mannu has been registered till now.

Now, apart from usual public opinion getting showered into this matter, it is the Politicians who are joining the party.

“Manturam’s son episode and inability of police to act makes out one thing clear that no law and order exists in the state.” Congress spokesperson Rajesh Bissa said.

Now as a short disclaimer, I would also like to point it out that this article is not against Any Political Party, but against all those people who considered themselves above the LAW and ORDER.

If you have any extra relevant information regarding this news, please feel free to share it with our readers in the comment section below.