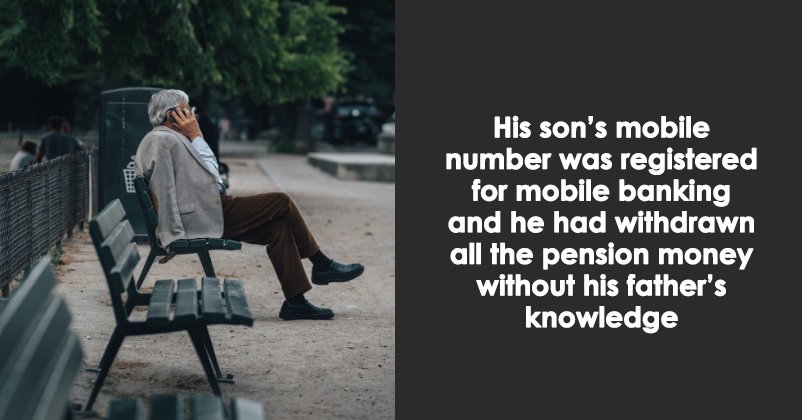 Our lives have changed a lot after digitalization as it has certainly made it very easy for us to purchase things, book tickets, buy insurance or do online banking but things are not so easy for the elders of the society because it is not easy for them to learn all this. There are many elder people who even face problems in operating a mobile phone leave aside carrying out financial transactions online and in such scenario, they need someone who can help them.

There is no denying the fact that banks, government and media portals keep on running campaigns for warning clients against phishing or online frauds but what can a person do if he is robbed by his own son. 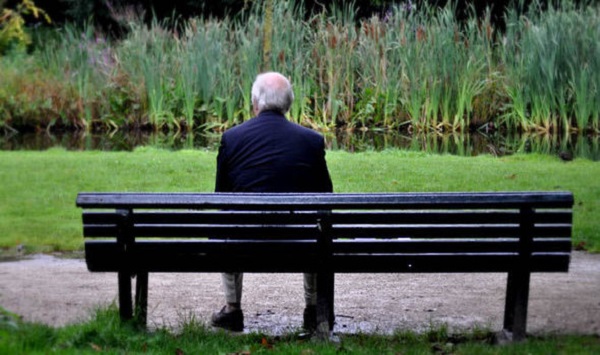 A Twitter user whose ID is @wittymaharia narrated a very sad incident which was witnessed by her in a private hospital when she went for the treatment of her mother. The Twitter user said that she and her mother were waiting at the reception when they overheard two nurses talking to a senior citizen. The senior citizen came for treatment and for the payment purpose, he gave his card to the nurses but he got the rude shock of his life when he was told that there was no money in his account. He was not ready to believe that as he kept on saying that his pension comes in that account and he hasn’t carried out any transaction. However, then it turned out that his son’s mobile number was registered for the purpose of online banking and he has withdrawn the whole amount.

The old guy was shocked and he sat crying in one of the chairs while the nurses consoled him and asked him to get his son’s number deregistered from his account.

The Twitter user then went for her mother’s procedure and when they returned, the old man was gone. There was only one question which was going on in their minds as to how a son could do this to his father. Though this incident happened some days back, the online user is still feeling very sad thinking about the incident and here is the series of tweets in which @wittymaharia narrated the incident:

Saw something so disturbing in a hospital that it brings tears to my eyes even after two days. I took my mom to a private hospital in Gurugram. While waiting at the reception, overheard two nurses talking to a senior citizen (1/n)

He had come for treatment and gave his card for payment. Nurses told him there’s no money in his account. To which he was bewildered, saying his pension comes in this account only and he does no transactions at all (2/n)

He kept arguing as he was damn sure there’s money, after much discussion, it turned out that his son’s mobile number was registered for mobile banking and he had withdrawn all money without the gentleman’s knowledge. (3/n)

The look of shock on the guy’s face was so heartbreaking to look at. He shattered instantly, while the nurses consoled and told him to be careful with his finances. That he should de register his son’s no (4/n)

He withdrew from the counter and sank in one of the chairs, pulling his mask up as much as possible to hide his tears. Even my mom was noticing and said how can a son do this to his father. (5/n)

Then we were called and started the procedure of registration for mom, while the man sat completely frozen, that image still haunting me. When we were done, mom sent me to look for him (6/n)

But he was gone. Never have I felt so angry and helpless at the same time, while looking what has become to humanity. Parents make numerous sacrifices for their kids, they don’t deserve such payback (7/n)

No one should ever go through what the poor guy did, and I feel that maybe I should have reached out earlier, and maybe punch his son in the face too. Mom said she’s lucky to have kids like us but that didn’t sound good (8/n)

Having kids to take care of you is the basic entitlement of a parent, not a privilege. We have to relook our priorities and values, and realise Karma is real! (n/n)

This is really disgusting and painful to hear as to how a son can do such a thing with his father, that too when parents make so many sacrifices for kids.

Soon the thread went viral and many online users started expressing their views in this regard. There were some who even offered to help the old guy if his details can be provided. Here are some of the reactions:

I also hv suffered a lot n forced to work at the age 71…
Sometimes I hv come under suicidal positions but surviving for my wife, she had to suffer a lot…

This is so heart breaking.
Hope someone helps that gentleman.Then again I wonder how many might be having such ungrateful children. 😢

Swabhimani parents prefer not to lean on children when the child relocates on the pretext of job.
Next they forget the very existence of parents!Despite best connectivity, dont even call!
Forget care, but such siphoning off their pension should be treated as non-bailable crime.

Though not all but a lot of youngsters are devoid of sanskars . After a certain age love for parents becomes the last thing in their list of priorities. Single child nuclear families are facing sometimes the worst kind of tragedies.

Can you check with the hospital for his details

They should have it

Kids cleaning up the pension account of parents has become such a common phenomenon. It is disgusting. Of late have seen many who think they have a right to parent’s earnings

Elderly abuse is happening on such a large scale n nobody really seems to care, or even talk about it. D increasing number of old age home are indicators of hw we r failing them as a society. When it's time 4 us 2 pay back 4 all they did 4 us this is what they have to go thru.

Requirement of old age homes getting more common, creating a tight rope walk for Men to balance between his parents and wife.

Upbringing of Girls teaches her not to care for parents of husband but expect her parents to be cared about.

Ironically, the old man would've happily handed over all the money to his son had he asked for it. And that's how bad people continue to feed off good people.

Distant reletive of mine elderly man

Who got retired 2 yrs back & earns almost 25k pension per month. His 2 sons and wife are so quick to withdraw from ATM as soon as it is credited & still this man isnt given food on time for his BP tablet

But he is like sab unka hi to hai

It’s really disheartening to see a son doing such a thing to his father who might have made many sacrifices to fulfill his wishes.