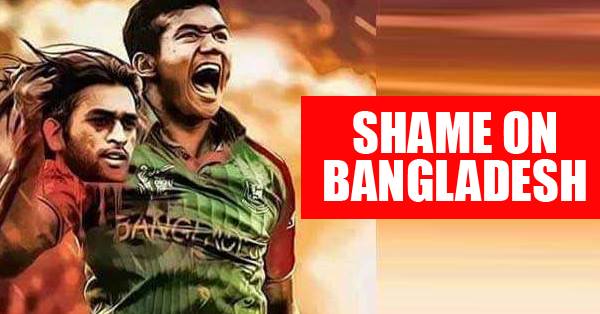 There seems to be no height of joy of Bangladeshi fans as the cricket team of Bangladesh has reached finals of Asia Cup T20 and will have a match with Indian cricketers at Sher-e-Bangla National stadium, Mirpur, Dhaka on Sunday. Recently, Bangladeshi players gave a good fight to Indian cricketers; however, it appears as if they have lost temperament and cool out of excitement and that’s why a Bangladeshi fan photoshpped a pic in which Taskin Ahmed, fast bowler of Bangladesh, is holding the chopped head of Indian captain MS Dhoni. The pic represents the anger of Bangladeshis on Dhoni who elbowed Mustafizur Rahman in last ODI series. Nevertheless, it won’t be wrong at all to say that they have crossed limits in this photo as competition on field and clash on social media are acceptable but showing beheaded pic of the captain of Indian cricket team is completely intolerable. What’s more, it also denotes that Bangladeshi are relating the game with hyper-nationalism and not playing it with the sports spirit.

One thing here deserves to be noted that Masrafe Mortaza, captain of Bangladesh, lately mentioned in his book that he doesn’t relate cricket and nationalism. This is what he wrote, “It is just a sport and it entertains people.”

If you don’t tend to forget things soon, you must be remembering a pic of Mustafizur’s cutter that showed half shaved heads of all the Indian batsmen. The photo was intended for representing the state of players of India when they faced Mustafizur and was published by Prothom Alo. Bangladesh must take cricket as a sport and play it with the sports spirit for the sake of entertainment and not getting hyper which results in such disgraceful photos.

This Man Was Deboarded From The UK Flight! Once You Know The Reason You Would Be Shocked!
Amazing! This Bengaluru Based Couple Got Something From Apple Which They Never Ever Imagined!