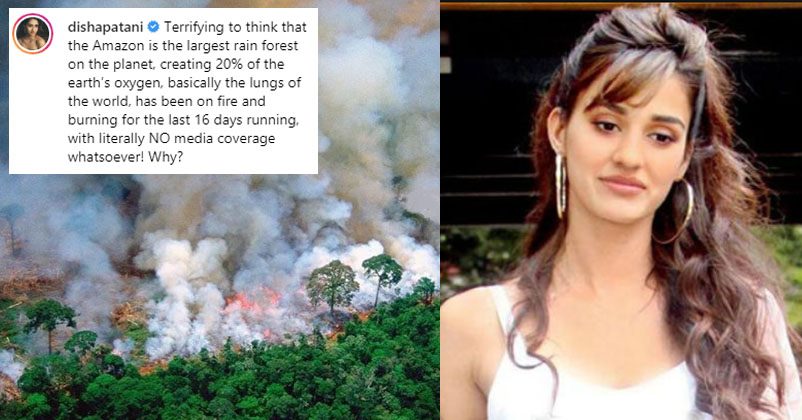 The Amazon Rain forest or the Amazon Jungle is the world’s largest rain forest famed for its biodiversity is on fire for the last 16 days. As per the reports of Brazil’s Research Center about 72,834 fire has been detected in the rain forest from January 2019 to August 2019.

Fires are raging at a record rate but the world media have decided to keep mum on the current devastating situation of the Amazon and amazingly we can’t hear any outcry. Large parts of the forest which are said to be the lungs of mother earth has turned into ashes.

Every civilian is screaming about the destruction made by humans. Bollywood celebrities took to their social media handles to share their concern on the scary fire in Amazonia and even urged to act on climate. Read the tweets below:

Been seeing heart-breaking & alarming pictures of the Amazon rainforest which has been on fire since more than 2 weeks!It is responsible for 20% of the world’s oxygen.This affects each one of us…the earth may survive climate change but we won’t. #SaveTheAmazon #PrayForTheAmazon

The Lungs of our planet Earth have been burning for weeks! #PrayforAmazonia https://t.co/eiduqZt257

My heart is breaking. The lungs of our planet are burning causing decimation, inconceivable destruction and horrific despair for indigenous people. #AmazonRainforest #PrayForTheAmazon pic.twitter.com/qgPteb2u7l

We humans need to bring the change to save our environment. We need lungs to survive so does our earth needs!

‘bikini’ Airlines From Vietnam To New Delhi Will Cost Rs 9 From Coming December
The Amazon Forest Is Ablaze, Smoke Takes Over A City 3000 km Away In Mid Day