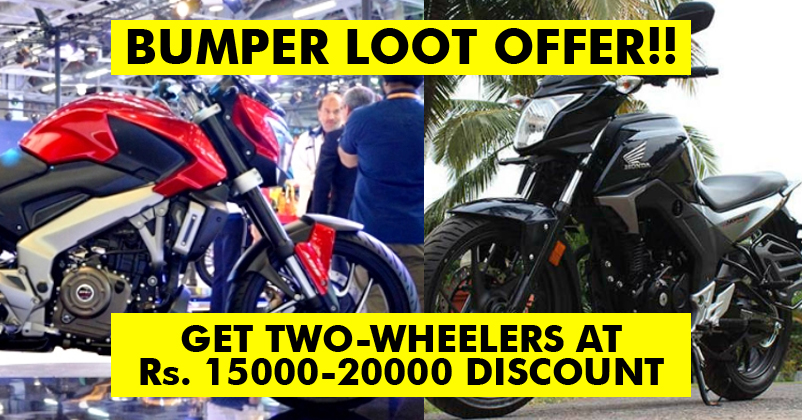 Honorable Supreme Court of India stopped the sale of BS-III (Bharat Stage-3) from 1st April. After the order by the court, all the BS-III Inventory will become obsolete on April 1st and so, whopping discounts on bikes, three-wheelers, trucks and buses have been offered to clear all the stock till 31st of March. There are about 6.71 lakhs of two wheelers from a total of 8 lakh BS-III, which are to be sold before 31st of March and it’s probably the biggest sale of all the time.

The government from 1st April made it mandatory for all the two-wheeler companies to roll-out two-wheelers with Automatic Headlamp On (AHO) feature. This order will be implemented from April and this feature will be very much similar to daytime running lamps (DRLs) on cars. Scooters worth Rs 53,000 being sold at 40,000 at some places and even lower whereas, other offers like free helmets, insurance and extended warranty are made to attract more customers. One can get a discount varying from 4,000 to 35,000 depending upon the brand and the state/city.

Hero Motocorp has been believed to have the greatest stock of BS-III vehicles. Free Insurance & a discount of Rs 12,500 is being given away at their show rooms.

Honda scooters and motorcycles, which is the largest domestic two-wheeler seller after Hero Motocorp, is giving away a discount of Rs 22,000 on CBR 250 & 150.

Bajaj Auto which is the third one would export the unsold vehicles to markets like Africa where BS-III is active.

Tata motors has the highest number of BS-III vehicles which are worth a whooping 3500-4000 crores. The discount for trucks and buses is varying from Rs 40,000 to Rs 4,00,000, according to the model and brand. A huge rush in the show rooms is seen since the news circulated. The demand of popular scooters like Activa is high and their availability is least; you just need to be lucky if you need one.

Wish you a very good luck for the new wheels! Share with your friends and let them know about the sale & ride with them on the discounted bike.

Continue Reading
You may also like...
Related Topics:bike sale, news