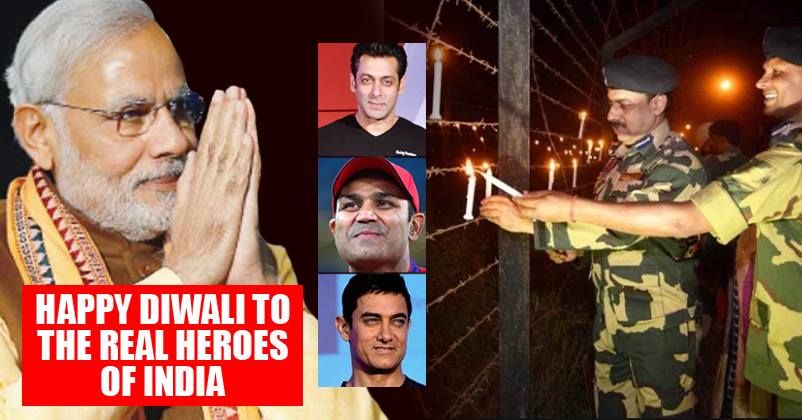 Since the Uri Attack and post our first surgical strike, there has been a lot of talking about Indian Army. Well, this should have happened way before…

Anyways, it’s good that people are celebrating our Jawans and their sacrifices. They protect our nation’s borders so that we get a peaceful sleep, so that we can celebrate festivals with our families, so that we can feel safe.

But, it’s our responsibility as well to give the respect they deserve, to make them feel that they are not alone there. To make them realise that we care for them! Recently, our PM Modi requested people to post their Diwali wishes for Jawans who are guarding our nation’s border and making sacrifices just for the sake of our country’s protection.

Not only the common people but many big names including celebrities came forward together to send their beautiful wishes to Indian Army.

Here is a compilation of some of those wonderful wishes that surely will make our Jawan’s Diwali special. Take a look…

I sent my #Sandesh2Soldiers. May the diyas of #Diwali shine bright for them! @narendramodi https://t.co/QAg58ca8hd pic.twitter.com/dpK6gOVkPU

Ur one wish can be the reason for a lot of smiles this Diwali.Send ur #Sandesh2Soldiers now via https://t.co/bUEI7AuMQc or Narendra Modi app pic.twitter.com/HNJjFAyOpZ

I sent my #Sandesh2Soldiers. This Diwali let us all remember our soldiers! via NM App https://t.co/x4Q38O8bcO https://t.co/kJvqYliG7Y

I sent my #Sandesh2Soldiers. This Diwali let us all remember our soldiers! via NM App https://t.co/N7WUIoDLpZ https://t.co/d9vsmrLZ0p

Remember & cherish the valour of our soldiers with every diya/candle we light up this Diwali. Our soldiers are our pride #Sandesh2Soldiers

After seeing such great response from many people, PM got overwhelmed and expressed his happiness on Twitter…

Glad to see the tremendous enthusiasm towards #Sandesh2Soldiers. The wishes will encourage our forces greatly. https://t.co/XVBq2XYS5t

Such gesture towards our Indian Army is absolutely beautiful. If you haven’t sent your Diwali wishes to our Jawans yet then login to your Twitter account and do it fast!

Do share your views with us in the comments section below! 🙂

India’s Steel Man, Gets His ‘BALLS HIT WITH HAMMER’ To Become The Strongest Man In The World!
Don’t Plan A Honeymoon To These 10 Places! The Sun Never Sets Here!