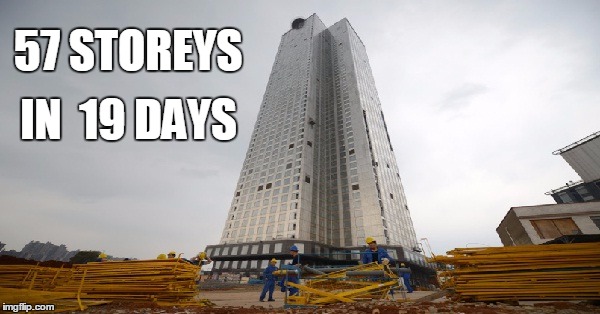 A Chinese construction company Broad Sustainable Building, is claiming to be have build 57-story building in just 19 days in Central China. The building which is named as Mini Sky City supposedly has 800 apartments and an office space for 4000 workers. The company claims they used a modular method and completed 3 floors each day to complete the building on time.

Check out this video of how the company erects the building in merely 19 days. The company claims that the technique used in building the skyscrapper one of the biggest innovation in human history. The building is said to have 800 lavish apartments with office space for 4,000 people. The Developers also claims that the building is environmental friendly. Check out the skyscraper on its way being completed. Workers worked around the clock to finish the job on time i.e. in just 19 days. The building was originally planned to be of height of 220 stories, but later it was cut down to 57 story skyscraper because the site was pretty close to the airport. The same company already has a record of building 30 story building in just 15 days. Most part of the building was pre-built off site to speed up the construction and also to reduce the pollution caused by delivery trucks. The company is also waiting for approval to build a 220 story skyscraper called Sky City, in the same city Changsha.

What do think about this amazing record. Let us know below in the comments section.