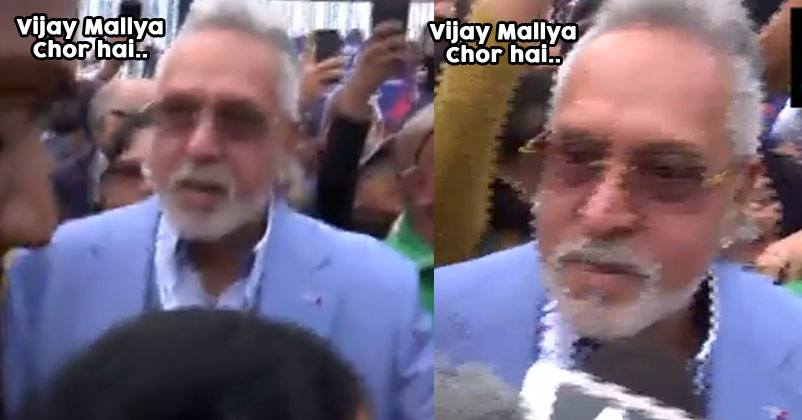 India owned Australia yesterday in the World Cup 2019 match. Well, it was really very interesting. India played well, not only the batting was great but also Bumrah won hearts. There was a lot of heat yesterday in the crowd. People were cheering and quite on the edge. There were a lot of moments that made the match even more interesting.
One of them was when Dhoni hit a six and Kohli’s expression said it all.

People were also booing to Steve Smith and Kohli, asked them not to. But the eye-catcher of the match was when Vijay Mallya was seen with his family, enjoying the match. This did not go well with the Indians there I presume.

After the match, while they were exiting. The crowd surrounded the family and started shouting at Vijay. There were also reporters present at the time, who recorded the incident. The crowd shouted, ” Vijay Mallya chor hai, chor hai.”

#WATCH London, England: Vijay Mallya says, "I am making sure my mother doesn't get hurt", as crowd shouts "Chor hai" while he leaves from the Oval after the match between India and Australia. pic.twitter.com/ft1nTm5m0i

Vijay did not react to anything and just said that ” I am making sure my mother doesn’t get hurt.”

Is it right on our part as Indians to harass someone in front of their family, at a public place?

Nike Just Introduced Plus Size Mannequins, Twitter Are Applauding Them For Their Take On Body-Positivity
Bhai’s Latest Hit Bharat, Is Still Rocking It In The Box Office