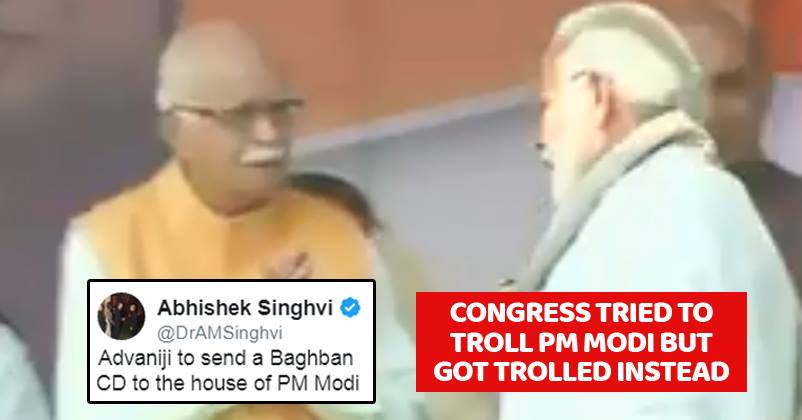 BJP won Assembly Elections in Tripura recently. Biplab Kumar Deb was elected as the next CM of Tripura. On the 9th of March i.e. on his oath taking ceremony, PM Modi, LK Advani, Rajnath Singh and Amit Shah were present.

One incident from this event is being talked about on social media. There are speculations of PM Modi ignoring LK Advani on stage. Well, when PM Modi arrived, everyone greeted him including LK Advani.

It is said that Modi gave response to each and everyone except Advani. However, since the camera captured Modi’s back and not his face, we can’t say if this is true.

As soon as a Congress leader Abhishek Singhvi saw this tweet, he trolled Modi. This is what he said;

Advaniji to send a Baghban CD to the house of PM Modi after thishttps://t.co/o0Tb5qPEjc

He said, “Advaniji to send a Baghban CD to the house of PM Modi after this”

In Baghban, we had seen how Big B had ignored his sons at an event. This is the reason why the Congress leader linked the incident to the film.

This is how he got trolled in return;

And which CD u will send to Pappu 😋! #courtroomcouch

Do you think PM Modi must have really ignored him?

Punjab CM Amarinder Singh Angry On PM Narendra Modi. Scolds Him Openly On Twitter
What Britain Achieved In 150 Yrs, India Did It In 30 Yrs. Even You’ll Love This