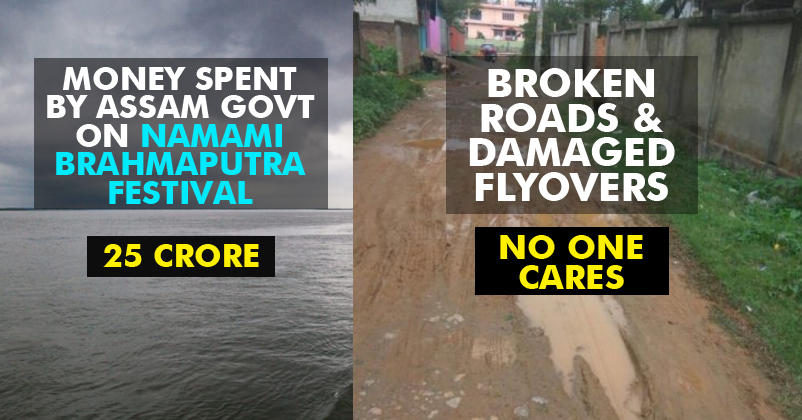 The old age debate between ‘marketing’ and ‘product quality’ is a never ending thing. Do we really need a quality product for its sale or is it the marketing that is important for the success of it. The same situation has once again risen in Assam where the Assam Government has launched one of the biggest river festival ‘Namami Brahmaputra‘ in the hope of reviving tourism back in the north east region. This is perhaps the biggest step taken by the government in decades to promote tourism for all good reasons.

The role of tourism in a country’s or state’s development is very important both from an economic and cultural point of view. When tourists come to your place, it’s the local economic sector which flourishes in synergy to the overall development that also includes big housing and infrastructure industries.

For those who are wondering what ‘Namami Brahmaputra’ is all about, it’s an event initiated by the Assam government for the first time to promote the art, culture and tourism in its state. The grand festival was inaugurated on 31st March 2017 by the honorable president of our country Mr. Pranab Mukherjee and more than 40 VVIPs turned up for the event. Even the Prime Minister Narendra Modi went on to twitter to write about it and gave his best wishes.

It is a matter of great pride that the #NamamiBrahmaputra festival is being launched by the Assam Government. Best wishes for the festival. pic.twitter.com/x0u11ZzBAJ

The main aim of such a grand event was to showcase the trade, commerce, culture, skill industry, and tourism of Assam to the world. The official authority even came up with 2 theme song videos where a number of lead singers from Bollywood performed together. The whole video cost the Assam Government a total sum of Rs 86 lakhs. The singers who performed in the video were Amitabh Bachchan, Papon, Shreya Ghoshal, Shankar Mahadevan, Kailash Kher, Sonu Nigam, Arijit Singh, Vishal Dadlani, Zubeen Garg and many more. It was indeed a great step especially when a lot of negative stereotypes were being spread on various social media platforms. But for such a great step, one has to pay a price for that. The budget allocation for the event #Namami Brahmaputra was more than whopping Rs 25 crores.

But, in the midst of all the chest thumping and bragging about the great potential of Assam Tourism, the government just forgot to address the real issue which apparently should have been on their top priority list. When you want tourism to flourish in your state, you need to at least provide basic facilities for it. You just can’t bank upon a single selling point of your product and believe that people are going to buy that. Here are the real pictures to show you how serious is the government to promote tourism in Assam in the real sense. Is this how the path that leads to development looks like? These pictures are not from any villages of Assam but instead are from Hatigaon Street, Guwahati city which is just 1.5 km away from the capital of Assam i.e. Dispur. Do you really think that the state of Assam can attract tourism by maintaining the roads in such great shape? Or do you really believe that the Rs 25 crores spent just for the marketing of a river festival can bring in so much of tourism that it will magically boost up the economy and will lead to the development of the connecting roads. According to a resident in Hatigaon, K.C Bhuyan said, ‘Since the last 24 years, the condition of the road is just like this. Even if they fix it, soon after a light rainfall, the whole road gets flooded with water and then for the next 36 hours, the water on roads stays clogged.’ It is a high time to address the fact that when the state government is going on enormous financial constraints in implementing a number of welfare schemes, the extravaganza so far made on Namami Brahmaputra on the taxpayer’s money cannot be considered as a justifiable act to promote tourism in the state of Assam which is already crippled by never ending problems.

The government first needs to solve the issues of broken roads, damaged flyovers and increasing crime rates before going ahead to change the overall outlook of Assam in the eyes of rest of the world. It would have been nice if the government had tried to invest even a fraction of Rs 25 crores for the real development of Assam which could have drawn more tourism in the state than the one they are now expecting after a complete whitewash from the rainfall exposing the real picture of roads and traffic.

PM Modi And Sheikh Hasina Laughed Really Hard For Almost A Minute For This Hilarious Reason
No More Late Night Parties In Goa, Government Will Ban It Completely In Next Two Weeks