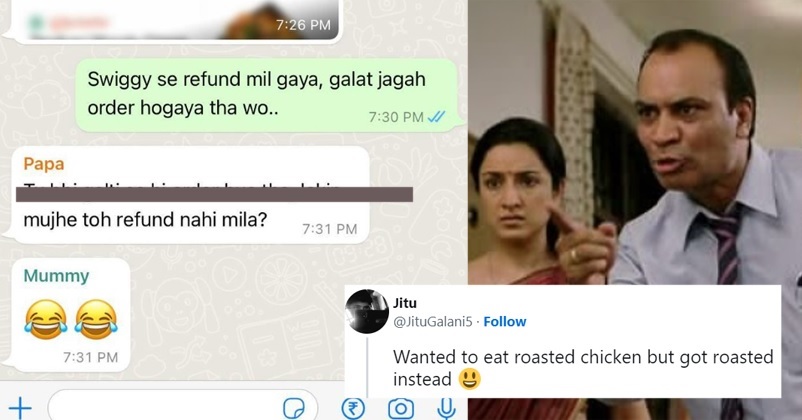 Desi dads are mostly known for being strict and disciplined, however some modern day fathers have started behaving more like friends to their kids rather than as fathers because it helps them have a good bonding with their children. But there is no denying the fact that Indian fathers are savage and they don’t miss a chance of pulling leg, especially of their son.

Recently, a Twitter user named Jitu shared a screenshot of a family group WhatsApp chat in which his father roasted him badly which made his mother laugh out loud. Jitu informed his parents that he got refund from Swiggy because the order got delivered on the wrong address. In response, Jitu’s father took a dig at him by saying that he (Jitu) was also ordered by mistake but he (Jitu’s father) did not get the refund and the response by Jitu’s mummy further made the whole scenario more hilarious. 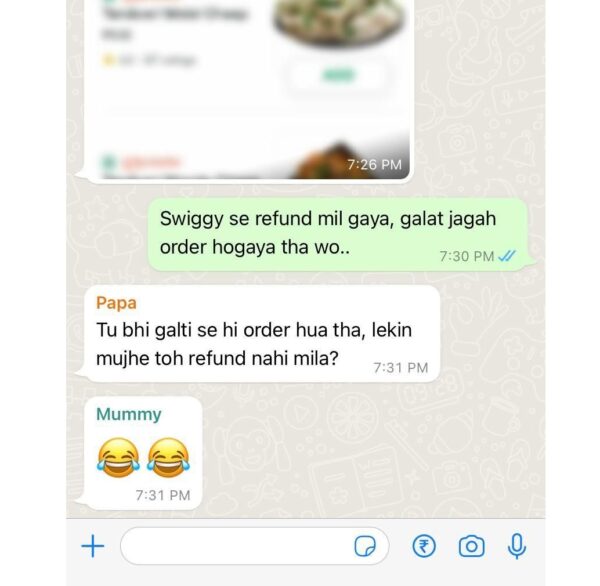 Jitu shared the screenshot with the caption, “Wanted to eat roasted chicken but got roasted instead”.

Wanted to eat roasted chicken but got roasted instead 😃 pic.twitter.com/mV4DBjGXNH

Soon, Twitter users also started trolling Jitu but there were some who called the screenshot fake, saying desi parents don’t respond with such savage text and that too in a minute. Check out some of the selected reactions:

Even the mother is laughing 😂😭😭

Your parents are typing a text lmao? My papa literally reply with “👍” to my every text https://t.co/AdnMbp1OyL

this is so fake no parents txt back within a minute tf? https://t.co/p1lkrHe7bc

Fake or real, the responses from mom and dad were just savage!