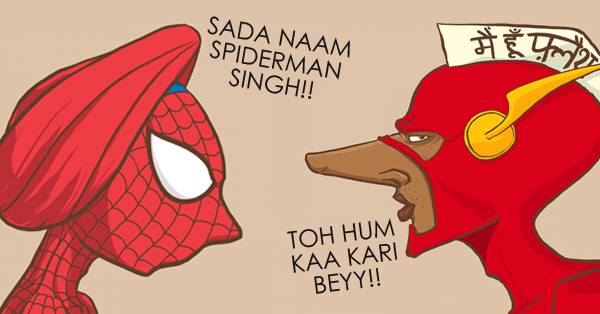 Raj told Scroll, “My first priority was to make them look Indian. I wanted people to sit up and say, ‘Hey, I know this guy.’”

The images that he has drawn seem to be inspired from pretty famous people as the painting of Yoda, looks a lot similar to the Indian politician Lalu Prasad Yadav, despite the fact Yoda is painted green. However, Yoda is not a superhero; he is a character from Star Wars series.

The Spiderman is seen as a Sikh and Wolverine seems similar to a Bihari who likes to eat a lot, while the character of Wonder Woman seems to be inspired from a painting of 18th century Bani Thani, which is also called the Indian Mona Lisa.

However, one art work that needs special mention is image of Robin-da, a recreation of Batman’s associate Robin. Robin-da’s image is created in a sensuous manner and it includes Robin-da and a typical Bengali looking man, embracing each other in a passionate manner.

Raj said, “We Indians are so afraid of talking about our sexuality. So I thought I would show Robin – a Bengali name – kissing a man.”

Raj also makes it clear that he has no intention of starting any discussion; he just wants to create art. He doesn’t wants to prove anything to anyone but he is doing all this for himself and he will be doing it till he doesn’t lose interest in it.

He is planning to create 11 more images within a month, he uses Wacom sketching tablet to create images and it takes him a day or two from making a sketch to fill colors in it.

Raj, who works in a national newspaper as an infographic designer is among the increasing number of artists who use social media as a platform to increase the reach of their art work. But he doesn’t feel very comfortable about it. He says, “Most people would not have otherwise seen my work. But people also don’t go deep online. They click ‘like’ and move on. I wish they would stay long enough to feel it.”

He is also concerned because it is very easy for anyone to copy from online platforms and distribute it without considering the amount of hard work and time that has been put into it by the artist.
Raj says, “People copy art like crazy, but they don’t have any idea that somebody’s artwork is behind it. I keep seeing people using my work as their profile pictures (on Facebook). People might think a Tamil Hulk is cute, but for me, there is a lot of hard work behind this.” This Model Was Insulted On A Flight Because Of Her Weight. What She Did In Response Is Mindblowing
18 Epic Wedding Photobombs Captured Just At The Perfect Moment