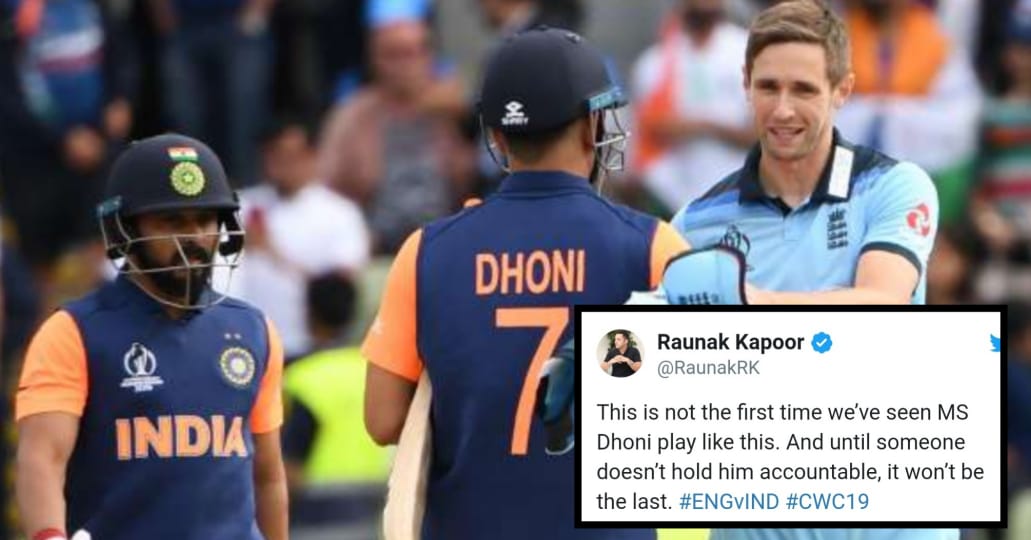 India lost to England by 31 runs at ICC World Cup 2019. However, fans made peace with the defeat as it was just a game but what did not go well with them was the performance by Kedar Jadhav and MS Dhoni. India needed 104 runs in last 10 overs and Hardik Pandya and MS Dhoni were on the crease. Hardik raised the game for few moments but was dismissed in 45th over.

After that, the game went south and seemed like Dhoni did not even try to chase the score and India only made 39 runs in the final 5 overs. Fans are disheartened and angry with the former Indian cricket team captain for not even trying.

Twitterians are slamming the Dhoni-Kedar partnership and making memes on their performance. It felt like they had already given up before even losing the game.

dada on air: i dont have explanation for that

Has Dhoni given up on his ability? Is it time?#INDvENG

Well as England bowled in last 10-12 overs, India’s lack of urgency and strikepower towards made it an anticlimactic end. May have still lost but would have been better fight. Fizzled out after Pandya’s dismissal. Dhoni disappointing, unable to press on soon enough

Not sure what Kedar and Dhoni trying to do here. Its not about winning but its about showing the intent to win….

This is not the first time we’ve seen MS Dhoni play like this. And until someone doesn’t hold him accountable, it won’t be the last. #ENGvIND #CWC19

Disgraceful batting from Dhoni & Jadhav towards the end of the match. Only taking singles. Intentions were clear from the start. #CWC19 #ENGvIND 🏏

It is disgusting to see no intention to win from MS Dhoni and team at the end of the game, it looks more than fixed, shame team India #INDvENG

MS Dhoni shouldn’t have retired from test cricket so early. He is still capable of playing a decent test knock. #INDvENG

I often see this comment from across the border about how you don't know the value of Dhoni because you have him and we don't.

Well, Pakistan, you are having him now and how does it feel? Exactly.

Can now understand why Indians get upset at Dhoni 😂😂😂😂