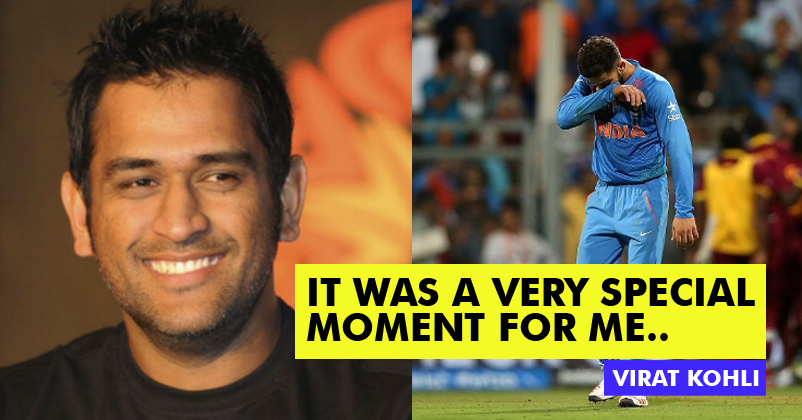 Virat Kohli proved that he’s a successful captain, with 2-1 win over England in the 3-match ODI series. India showcased a brilliant performance in this series; of course, Virat won all the appreciation for leading the team so well. The captain himself displayed awesome batting skills, thereby winning hearts of all fans.

Since Virat managed everything with perfection, Dhoni decided to gift him something memorable after their win in the 2nd match. He wanted to make it special for him because this was Virat’s first win as a captain. Do you wish to know what Dhoni gave him? Dhoni gave Virat the match ball signed by him, so that he remembers the win for life. We all know that Dhoni had a habit of collecting stumps after every win; so, he decided to carry this legacy forward even though he is not the captain anymore. Dhoni had no option but to give this signed ball, because these days, LED stumps are used in matches and since they are very costly, cricketers aren’t allowed to take them home.

In an interview, Kohli said

“MS gave me the match ball in the second game. The stumps are too expensive nowadays and they don’t allow us to take them home (smiles). He gave me the ball and told me that it was my first series win as captain and it is memorable. It was a special moment for me and I got the ball signed from him as well.”

This gift reflects Dhoni’s kind and humble attitude; even though he is not the captain now, he ensured that the new captain feels proud and happy over the win. Virat seems to be very overwhelmed with this gesture of Dhoni. We loved this special gift, what about you? Do share your views in our comments section below.

Top 10 Greatest Moments in The History Of WWF/WWE
8 Ugliest Fights In Cricket Which Turned The Ground Into A War Battlefield!