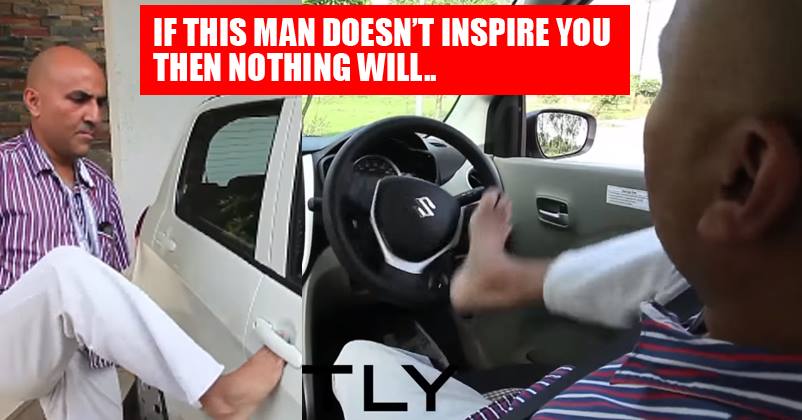 A man without his hands is unknowingly and unfortunately considered as a burden for his family. Even the innocent RAMU KAKA and THAKUR from the movie ‘Sholay’ can empathize with this feeling. However, there are certain people in this world who opt to struggle hard instead of begging or relying on someone else. Vikram Agnihotri is also one among them. He could have stayed back at home and showed self pity about his physical disability but instead decided to make his unusual appearance as his unique property.

Vikram Agnihotri is a 45 years old man without any hands. And yes, he is a driver, with a LICENSE too. And this is the first time in India, that person without any hands got his driving license. Currently he runs a Gas agency in Indore. Along with that, he is a motivational speaker and is also pursuing LLB. At the early stage of his disability, he realized that he can’t live his life as a mere burden on many people for his own basic needs. In a country where people’s application for driving license are rejected for reasons as simple as ‘NOTHING’, getting a driving license for Vikram Agnihotri wasn’t an easy task. Agnihotri was asked to take a rigorous driving test on a heavy-vehicle track when he applied for a permanent licence in October 2015. However, his application was rejected on the grounds of not capable to give hand signals while driving. QUITE OBVIOUS ! !

The transport commissioner had his own legit reasons to decline Agnihotri’s application. He did give technical reason for failing Agnihotri in the test. One of the reasons for failing was the fact that his car was not designed according to the needs of a differently-abled people.

For people who are wondering about the practicalities for driving a car without any hands, Agnihotri holds the steering wheel with his right foot and accelerates with the second foot while sitting in an automatic gear car. There are indeed few good people who need to get the credit for giving Vikram Agnihotri the chance to drive AGAIN. Since October 2015, Agnihotri had been filing petitions to state ministers and Nitin Gadkari (The Union Minister of Road Transport and Highways in India). At last his hard work and the better understanding from various government authorities fetched him his driving license under the invalid carriage category.

According to him, his physical challenge isn’t a challenge for him and he has successfully overcome it quite well. He doesn’t not think much about it. He also emphasized on the point that several people around the globe were driving their car with their feet but what makes it special is the fact that this is the first time that someone in India applied for a driving license in such a case and for that laws need to be amended. What do you think about it guys ? Isn’t it amazing to see someone taking a step further to live his life on his own without making an excuse about the issues that he has. This certainly gives us a life lesson that no matter how bad are the situations, if you stay dedicated towards your passion, you will definitely achieve your goals.

Continue Reading
You may also like...
Related Topics:Car, driving, hand, no, Vikram Agnihorti

This Guy Tried Out An Innovative Way To Get His Resume Noticed! Yes, He Used Doughnuts! Read How..
We Bet Pakistan Didn’t Know How Sushma Swaraj Made This Pakistani Girl’s Dream Come True!