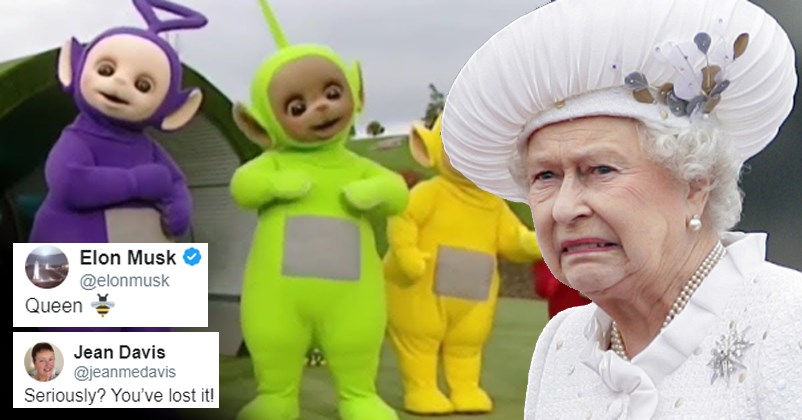 SpaceX CEO Elon Musk is known for his witty tweets and an amazing sense of humor. Every now and then his tweets catch everybody’s attention and get a good response. Recently in his tweet, he mentioned
Britain’s Queen Elizabeth II and left his fans bewildered.

In his tweet, Musk compared Queen Elizabeth II to popular children’s show Teletubbies. He actually compared their outfits by posting pictures of Teletubbies and then replacing them with the Queen in the same color outfits.

The tweet took twitterians by surprise. While some laughed with the joke and praised his sense of humor, there were some who slammed Musk for making fun of the Queen of Britain. A twitter user actually asked him if he was okay. Read the tweets here.

Mid-life crisis or trying to appeal to younger generations? https://t.co/wymSsX5CZd

Anybody else get a little bit nostalgic? No? Just me? Okay… https://t.co/vFQvtXMUxv

Elon, mate, are you okay? https://t.co/BsxbaxEvX6

@elonmusk what is happening? https://t.co/8qCUczpXJf

And you created Tesla huh? https://t.co/H0ewAaQpsT

I must say, I’m buzzing from all these memes

Heavy Rains In Mumbai…Mumbaikars Are Busy Trolling With Amazing Memes
Article 370: Desi Twitter Sharing Memes About The Next Script Ready For Akshay Kumar