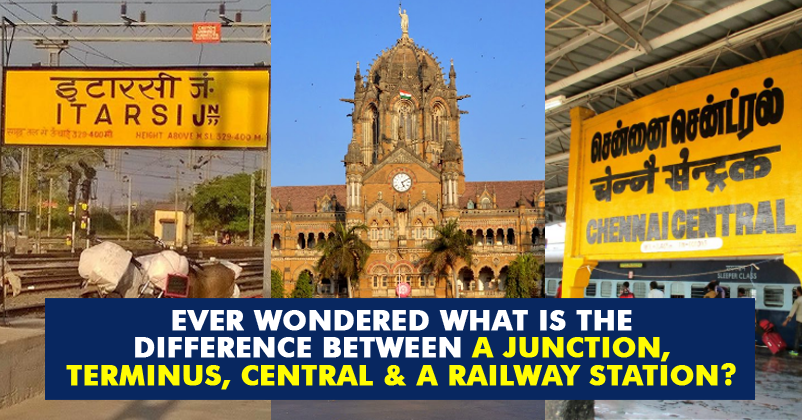 Indian Railways, which is operated by Government of India under the Ministry of Railways, is solely responsible for the rail transport in the country. It is considered as the fourth largest railway network in the world, with a running track of 92,081 km and covers a distance of 66,687 km. Indian Railways has carried 8.107 Billion passengers in 2015-16 alone.

That is approximately 22 Million passengers a day. In order to make the rail travel comfortable, 7216 stations are built in different parts of the country. There is a difference in the names of stations, like some are named Junction, some as Terminus and some are named Central. So, have you ever wondered what is the difference between a Junction, Terminus, Central and a Railway Station?

A station is known as a Terminus/Terminal when the trains can enter and leave the station in only one direction. In other words, the track ends in the other direction. A train has to leave in the same direction as it entered. Some examples of Terminus are: Some examples of Junction are: A station is simply a place where a train stops for passengers/goods to enter and leave the train. Note: Chennai Central can also be called as Terminus but as it is one of the oldest stations in India, it is being continued as Central. Same applies to other stations also.

So did you understand the difference finally?

Continue Reading
You may also like...
Related Topics:Central, Central & A Railway Station? Here's The Answer, Ever Wondered What Is The Difference Between A Junction, Indian Railways, Junction, railway station, Terminal, Terminus

Sir Roger Moore’s Death Shooked Everyone! Fans And Celebs Flooded Twitter Appreciating His Work.
10 Facts About Bear Grylls That Prove He Is Not From This Planet!