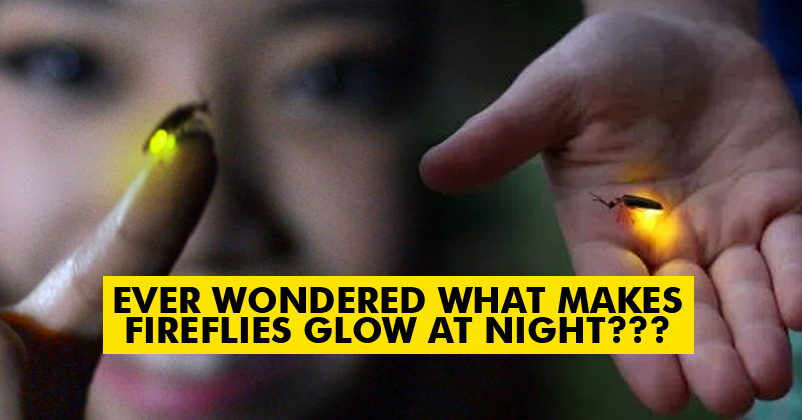 Well, we all have seen the faint uncanny glow of fireflies especially in the summer nights. But did you ever wonder how do these insects light up during the under the moon shine? The process is kinda astonishing!

Typically seen as the summer time staple owing to their thriving power in warm and humid environment, there are around 2000 species of insects that glow in the night. That’s like a lot! Exotic Earth indeed! But the question is what makes them glow? Here’s why:

Actually, they have a chemical locha. Yes! Fireflies produce a chemical reaction inside their bodies that cause them to shine. This process is called bio-luminescence. Okay, so this isn’t the same as a light bulb as it produces heat along with light, the fireflies emit cold light. Hmmm, so now we know why do not they catch fire when they are called ‘fireflies’.  Anyway, let me enlighten you a bit over the process. When oxygen combines with calcium, Adenosine triphosphate (ATP), and luciferin in the presence of luciferase, light is produced. Nevertheless, scientists are still not sure of their blinking patterns. This somehow remains a mystery, as they are still not sure if the patterns are controlled by the fireflies’ organ or oxygen supply. But fortunately, they do know what these flashes are used for. And that’s something we should have guessed about! The fireflies emit light which work as signals to grab the attention of possible future mates. In fact, both male and female turn on their lights when selecting a mate, and some also suggest that blinking is their way of communicating with each other during courtship. You see the Love-Lust Chase thing is everywhere!

So, ya I assume now things are pretty clear with you all. Also, about that so called myth you had – if you hold a firefly, it will eventually stop glowing because it has to fly in order to produce the energy which helps it emit light? That isn’t true. They do not have to move in order to produce light, as suggested by Steven Haddock, bioluminescence Scientist at the Monterey Bay Aquarium Research Institute.

So, the next time you see the fireflies, you would know – Chemical Locha hai Boss!

Here’s How Much Do People Weigh In Different Countries Around The World
Ever Wondered Why Do Olympians Bite Their Medals ?