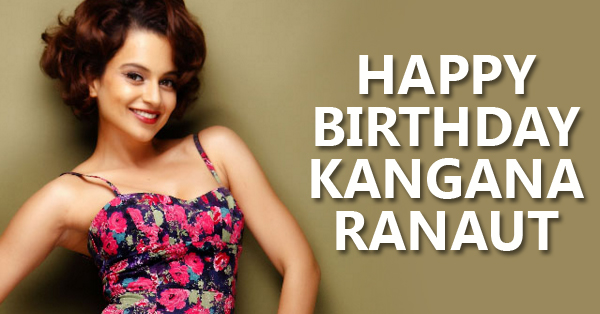 The beauty ‘Queen’ Kangana Ranaut is now ruling the bollywood film industry. Her journey from a Gangster’s girlfriend to the Queen of hearts wasn’t easy. From a small town girl to a bollywood star, Kangana has made really big in the industry. Let’s have a peep into the actress life on her birthday. She was born in Himachal Pradesh, India. Her father was a businessman, her mother (Asha) was a schoolteacher and taught Sanskrit, and both expected her to work as a physician.

2. Wanted to be a doctor herself She wanted to be a doctor before starting a career in showbiz. After a long struggle, the actress was spotted by Anurag Basu in a coffee shop and got leading role in Gangster.

3. She has an elder sister and both share a strong bond She has an older sister named Rangoli who actively helps her sister Kangana in her films. Kangana has a strong emotional bond with sister Rangoli, who was a victim of an unfortunate acid attack in 2006. Kangana was quoted as saying that she looked after Rangoli and got her treated at the best places.

4. She has had a difficult life facing abuse During her initial years in Bollywood, Kangana was ridiculed for her poor diction, typecast as the angst-ridden gangster’s moll and allegedly physically abused by a former Bollywood star. Meanwhile, elder sister Rangoli had acid flung at her when she was only 23 and still studying in college, supposedly by a spurned suitor.

5. She turned down a highly paid advertisement because it was misleading Kangana once again drew our applause when it came to light that she had turned down a 2 crore deal to promote a fairness cream in 2013. She said, “Ever since I was a kid, I have never understood the concept of fairness. Especially, in such a case, as a celebrity, what kind of example would I be setting for younger people? I have no regrets about turning this offer down. As a public figure, I have responsibilities. My sister (Rangoli Ranaut) is dusky, yet beautiful. If I go ahead and be a part of this campaign, then, in a way, I would be insulting her. If I can’t do that to my sister, then how can I do it to an entire nation?”

6. She is rumoured to be the highest paid actress in Bollywood at the moment She is rumoured to be the highest paid heroine in Bollywood at the moment. If her mass of curly hair and lack of industry connections made her an unlikely candidate for a Bollywood Diva, her forthright manner and brutal honesty has turned her into an even more unlikely Bollywood Feminist Idol.

Shraddha Kapoor Seen Riding A Bike With This Actor, Checkout These 12 Pics!
OMG! The Reason Why Malaika Wants To Divorce Arbaaz Is Shocking! You Might Have Never Expected This!