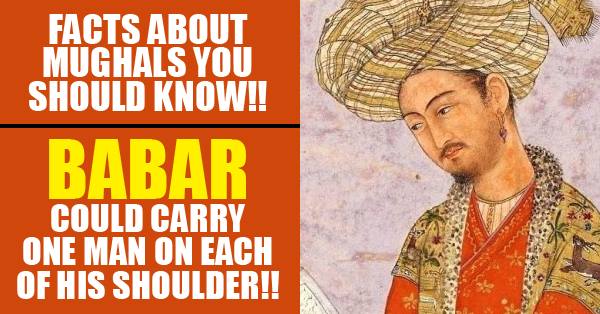 Here are few facts about various rulers of the Mughal dynasty: He is famously known as Babur. The name Babur is derived from the Persian word Babr, meaning Tiger or Lion. Babar attained his first power position at the mere age of 11! Babur was considered extremely strong and fit. He allegedly could carry 2 men, one on each shoulder, and then climb slopes on a run, just for exercise. Legend holds that Babur would swim across every river he encountered, including twice across River Ganges. Babur also had a great passion to kill people, cut heads of people and create pillars out of cut head. He claimed to have created several such pillars in his autobiography. Second ruler of the dynasty, he is known as Humayun. He lost to Sher Shah Suri in 1540. He gained back Delhi in 1545. He died when he fell from stairs of his library. He is most commonly known as Akbar, a title that was conferred on him by his subjects. He attained the power at the age of 13. Akbar slept only 4.5 hours a day, 3 hours at midnight and rest in afternoon. He did not want to waste his precious life in sleeping and was workaholic. After getting up Akbar would visit his pets’ stables everyday without fail to check on them.

This angered his nobles and religious priests a lot. Akbar would walk from Mathura – hunting grounds to Agra fort almost 60 km in few hours. His entourage could never walk back so fast and only one or two men were left with him when he reached Agra fort. He is one of the most known and respected among the Mughal rulers as he was very liberal in his views. Known to many as ‘Jahangir’ he was an emperor who loved painting, architecture and fine arts. A successful and benevolent ruler, he cherished the well-being of his Indian subjects. He not only revered both Hindu and Muslim saints but also improved social conditions without interfering with customs. But Jahangir was not without military ambitions. A capable soldier, he dreamt of conquering Transoxiana, the seat of the government of the early Timurids. Very commonly known as ‘Shah Jahan’, he was the 5th Mughal emperor. Taj Mahal, meaning ‘crown of palaces’ in Arabic, was built by during reign of Shah Jahan in memory of his beloved wife Mamtaz Mahal. Shah Jahan was married 7 times and Mamtaz Mahal was his 4th wife. Mamtaz Mahal died while delivering her 14th child. Shah Jahan was put to house arrest by his own son Aurangzeb. Aurangzeb was one of the four sons of Shah Jahan and the cruelest among them. He imposed many harsh and illogical laws. He was given a title ‘shah-i-bekhabar’ by mughal historian Khafi Khan. He is commonly known as Bahadur Shah II. Bahadur Shah was 82 years old and in poor health when the revolting sepoys from Meerut stormed into the palace on 11 May 1857. According to William Dalrymple (The Last Mughal, 2006), sepoys and cavalrymen from Meerut numbering 300 rode into Delhi in the morning and massacred Christian men, women and children they could find in the city, and proclaimed Bahadur Shah as their leader and emperor.

Bahadur Shah gave his blessing to the sepoys. A. G. Noorani (Indian Political Trails 1775-1947) writes, Bahadur Shah was the one around whom both the communities rallied as a symbol of revolt and unity. Bahadur Shah Zafar was the last Mughal emperor of India who was born in 1775 at Delhi. During Bahadur Shah Zafar’s reign Urdu poetry developed and reached its acme. Influenced by his grandfather and father who were also poets, even he developed this creative skill.

EXCLUSIVE: Bigg Boss Got 10 CRORE Extortion Threat From UNDERWORLD
How New Year Is Celebrated In Different Cultures Is Just Amazing Thing To Know