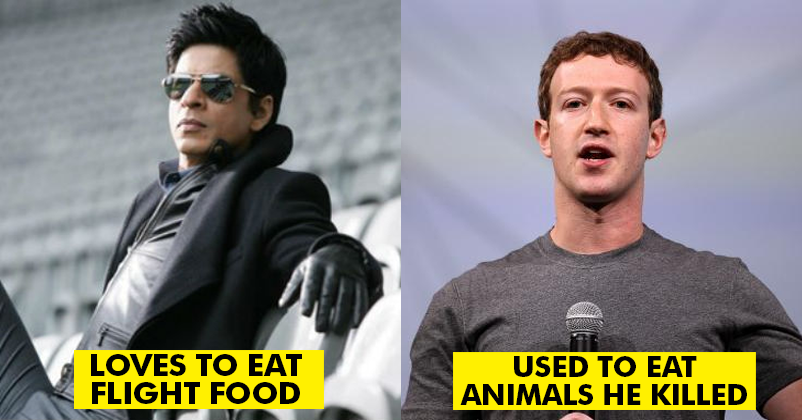 There are many among us, especially Indians who live to eat. We work hard so that we can manage great meal thrice a day. If that’s too much, at least twice a day. Our eating habits include all kinds of stuff, even junk food which we love religiously.

But as you cross boundaries and meet new people you will see there’s still a lot you need to know about food and diets of people in the world. Here is a list of some popular celebs who have weird eating habits that will surprise you for sure.

1. Beyonce, Water With Pepper or Syrup Shocking it may sound to you, but it’s true. Beyonce challenged herself for this diet to play a role in film ‘Dreamgirls’. She used to drink glasses of water with pepper and syrup for two weeks and nothing else. Can you do that even for one day?

2. Renee Zellweger lived on Ice Cubes to get slim fast Renee Zellweger increased weight to justify her role in film Bridget Jones’s Diary. After completing the film, she had to decrease the weight fast so Renee started living on ice cubes. Of course, it’s not healthy at all.

3. Karl Lagerfeld have steamed apples for breakfast and skips lunch Karl Lagerfeld – The director of Chanel thrives on liquids only. He takes steamed apples for breakfast, avoids lunch and keeps drinking diet coke throughout the day. Bollywood’s own King Khan SRK loves to eat the food available during flight so much so that he even awaits and looks forward to it. Also there’s a weird fact about SRK that he doesn’t like Ice-Cream. World is weird. On one side, SRK doesn’t like Ice-cream and on the other side, we’ve Warren Buffet who can’t help himself from relishing over it and wants Ice-cream everyday during breakfast. He also has his food racks filled with Oreos and Velvetta Cheese. He loves guzzling coke and drinks six a day.

6. Henry Ford used to have roadside weeds along with sandwich The founder of Ford Motor Company, Henry Ford used to take the roadside weed and eat along with sandwich and soup. He used to have an opinion that his body is a machine and he needs a natural fuel for it. The founder of Apple used to have only carrots in his diet. According to biographer Walter Isaacson, Jobs had so many carrots that his skin turned orange.

6. Mariah Carey used to have The Purple Diet The immensely popular Mariah Carey also had her struggle with weight. But the one reason she is able to maintain her weight even in this age is her “Purple diet”.

Mariah Carey eats only purple things, such as grapes or eggplant; three days a week. There are a lot of healthy purple foods, but it isn’t a very balanced and complete diet. Sustaining a healthy diet of only purple foods is nearly impossible, but it works for her. Nicolas Cage comes out to be really weird as far as his eating habits are concerned. As per Lookdamngood, Seafood and poultry are the only meats that Cage eats, and he says it’s because they mate in a dignified way. Apparently cows and pigs don’t make love fancily enough to entice Cage’s palate. There are even only certain types of fish that Cage will eat, but we’re not exactly sure how they do the dirty.

8. Novak Djokovic was noticed eating grass after his Wimbledon win Djokovic, who eats only gluten-free food, was once noticed eating grass after his 2011 Wimbledon win. He was also spotted eating grass of the lawn on centre court. In Punjabi there is a hilarious proverb, “Banda ban Ghaa Kha”. It means Be Human, Eat Grass”. Novak Djokovic seems to have taken that proverb seriously.

9. Back in 2011, Mark Zuckerberg used to eat only those animals that he killed Mark Zuckerberg, the founder of Facebook had made a vow in 2011 that he would eat only animals which he hunted. He used to slaughter pigs, goats and chickens during that year. However, he stopped hunting animals a year later.

10. Albert Einstein was caught eating a grasshopper once by his driver Famous scientist Einstein was very fond of grasshoppers. His driver once caught him while having it.

Continue Reading
You may also like...
Related Topics:Food, World