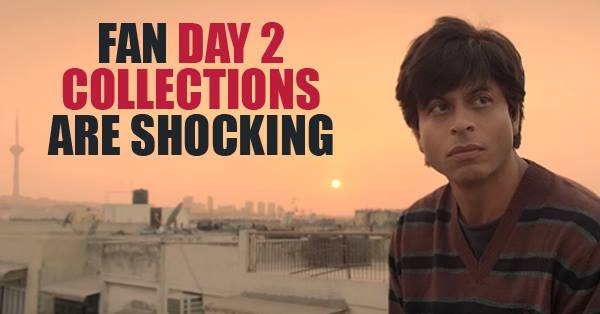 Shah Rukh Khan starrer “Fan” was no doubt one of his most awaited movies as fans would get a chance to see their favorite superstar in double role, the star and the fan itself, which was surely an amazing concept. What’s more, after the release of its trailer, people as well as makers of the movie had high hopes of it being a hit on Box Office in terms of collection and reviews. However, after the release, it won’t be wrong to say that “Fan” disappointed Badshah since it could not earn that whooping amount as was expected from it. Talking of the earnings of “Fan” on Friday, it was Rs. 19.20 crore which is not a very good opening collection if we talk about a movie of King Khan. Unquestionably, even SRK himself must have hoped for better results especially after Jabra Fan song from the movie got so much popularity. However, as far as the second day collection of “Fan” is concerned, it’s rather more disappointing as the movie could earn just Rs. 15.40 crore and hence, the total collection made by the movie so far in India is Rs. 34.60 crore.

Let’s see if Sunday brings some hope for “Fan” and Shah Rukh Khan; nevertheless, one thing is certain; if this movie too could not recover the cost or earn profit, it will be a big shock for SRK who already suffered losses due to his previous movie “Dilwale”.

Opening/First Day Collections Of Top 25 Movies In Bollywood
“If I Don’t Win Award For ‘FAN’, I Will Snatch It Away,” Says Shah Rukh Khan